Ever wondered what it’s really like to do a via ferrata in Spain? And what you need to know if you’re considering doing one?

First, let me explain what a via ferrata is. Many people have never heard of one.  I hadn’t until I moved to Germany.  A via ferrata also called a Klettersteig in German, is a steel cable fixed to the rock.  You attach your harness to the cable and make your way up a rock face.

Depending on the route, there may be climbing aids. These can include iron rungs or steps carved into the rock.  At other times, your only climbing aid is your own agility and strength. 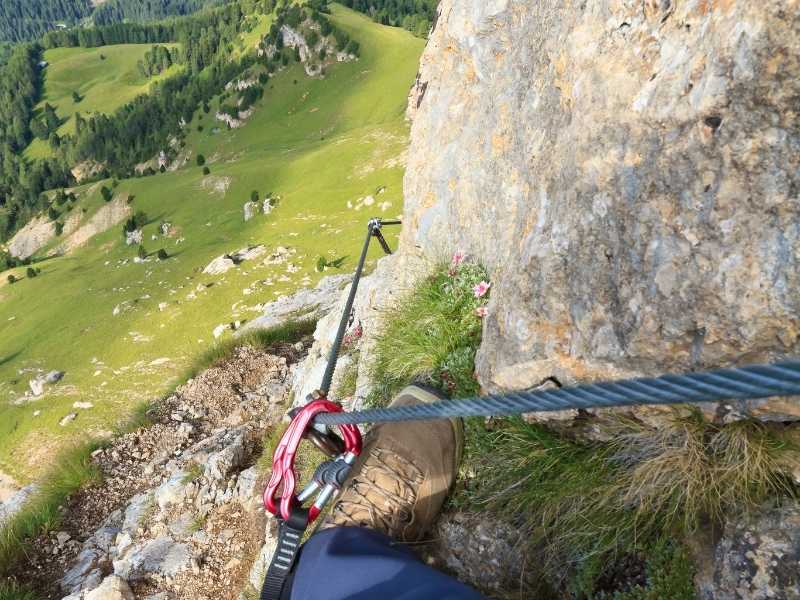 Are Via Ferratas in Spain Difficult?

Via Ferratas in Spain, as elsewhere in the Alps are graded from A to E. A is the easiest. E is the most difficult. You can find all levels of via ferratas in Spain. So it really depends on the grade of the via ferrata.

Don’t be fooled into thinking that via ferratas in Spain can’t be as tough as the ones in the Alps as I was.

A Short History of Via Ferratas

When I had the chance to do a via ferrata in Vallcebre, Catalonia, Spain I jumped at the chance.  This is my element.  I love hiking and scrambling and you’ll find me in the German Alps almost every weekend.

I had only discovered via ferratas a couple of years ago but have loved the ones I’ve done. But to be honest, I didn’t have high expectations.

Via ferratas are mainly found in the Dolomites in Italy and Austria, with a few in Germany.

They were originally established to move soldiers across mountains in WWI.   But in Catalonia, Spain? Obviously, this wouldn’t be a REAL one.

My Experience of Doing a Via Ferrata in Spain

I was wrong.  The most challenging part of the climb was the first few steps.  That might not sound like a lot, but when your feet are slipping up the rock bringing your body down, it’s damn hard work.

Immediately, I cursed myself for not doing more push-ups. I tried again, and slipped, and slipped. And slipped yet again. Becoming very frustrated, I  undid my Via Ferrata harness and let someone else go in my place.

I could quit. And I had a good excuse.  A recent surgery had left me feeling much weaker than normal. There’s no shame in acknowledging your limits.  But instinctively I knew, that it was within my limits.  I gathered my inner strength, changed my self-talk from I can’t to Of course I can.

Despite my shaky arms and running shoes with no grip, I was brave enough damn it!  This mountain would not get the best of me.

I still slipped, but less so.  And instead of moving backward, I was slowly but surely moving upwards.  Once I reached the first rung on the ladder, I breathed a sigh of relief.  The toughest part was over….or so I thought.

I made my way steadily up the 90° ladder built into the wall.  This was the easy part.

I caught up with the rest of the group and waited for them to move on.

While I was waiting I started chatting with Miquel, a local who lived near Barcelona.  He didn’t speak much English and I don’t speak much Spanish, but I liked him immediately.

To be honest, I was so focused on the overhang that I had to get myself across using my almost non-existent upper body strength, I hadn’t even noticed the view.

His keen observation skills picked up on that.  Watching him climb up slowly, but steadily behind me, with a crinkly smile on his face, I get the feeling that he’s somebody who really knows how to enjoy life.

To enjoy being in the moment.

He saw me in weakness, emotionally and physically tired.  But he didn’t encourage me. He didn’t say  You can do it! Instead, more powerfully, he said Tranquilo, tranquilo. He reminded me to take time to enjoy the journey – even the tough parts. Meeting Miquel was one of the highlights of my via ferrata.

Related Reading: Gaudi’s Barcelona: Architectural Marvels That You Must See.

Check out my friend Tony’s video of the via ferrata we did together in Vallcebre, Catalonia.

Despite what I previously thought, via ferratas in Spain can kick your butt, like the Via Ferrata La Guagua in Gran Canaria.  We only did one that was ranked as medium difficulty, so a C-D level.  Still, all of our group found it more challenging than anticipated.  Having said that,  every single one of us loved it. But it’s important to know your limits.

If you haven’t done a via ferrata before choose a beginner one that’s shorter. That way you can see if you like it, then move on to more difficult via ferratas.

Via ferratas are not for you if you’re afraid of heights.

If you’re lacking upper body strength like I am, it doesn’t hurt to start doing push-ups a few weeks beforehand. Your body will thank you the next day.

Wear hiking boots.  I stupidly wore runners. The lack of tread made it challenging to get a grip in certain places.

I highly recommend doing a via ferrata with a guide. This is especially true if you haven’t done one before or don’t have a via ferrata set. Going with a guide takes a lot of the guesswork out of finding a via ferrata, plus they’ll be able to assist you. When you come to a difficult part, it’s very helpful to have a guide tell you Put your right hand here, your left foot here, etc.

Guided Via Ferratas in Catalonia, Spain

Check out these guided via ferratas which you can do from either Girona or Barcelona. They range from beginner to advanced so there’s one for every skill level.

And remember, the most important thing when doing a via ferrata in Spain…Tranquilo, tranquilo….especially during the tough parts. You’ve got this. 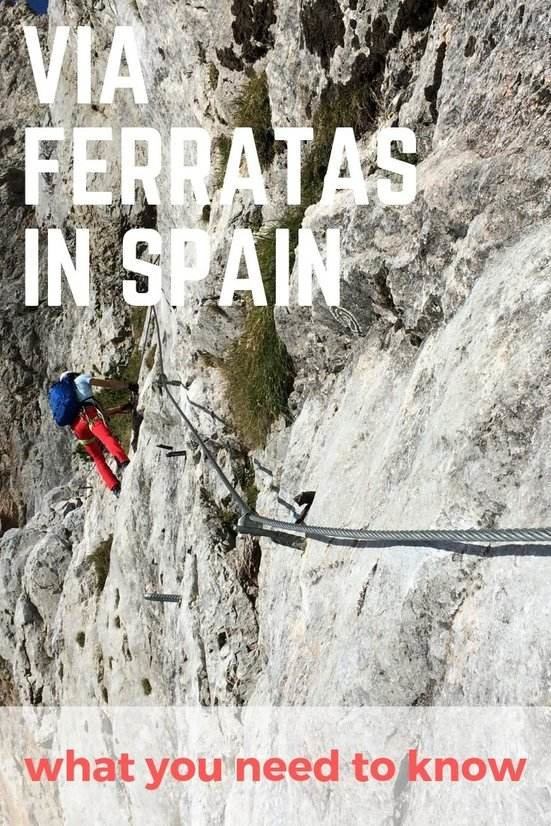 Thank you to the Catalunya Tourism Board for making my trip possible.  As always all opinions expressed are my own.

Originally published in Oct 2013. Updated and republished May 2019.