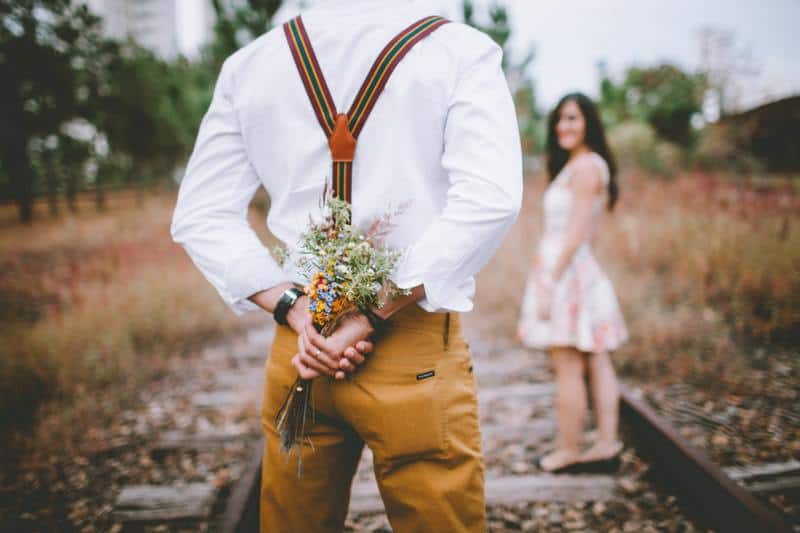 German men will likely never flirt with you as an Italian would. Nor will they shower you with romance as the French would. Romance in Germany is more subtle.

It’s like an onion, exposing itself one layer at a time instead of all at once, but no less flavorful.

In my 20s I would have considered dating a German guy boring. In my 30s it became sexy. So much so that I had a 9 1/2 year relationship with one.

So what’s it really like dating a German guy?

If he likes you, he may even call the next day.  Germans have rules for almost everything. But apparently waiting two days to call so that he doesn’t appear desperate is not one of them.

Be forewarned; he’ll call because he promised he would. It’s not necessarily because he likes you.

He may just be calling you to inform you that he doesn’t like you, and doesn’t want to see you again. But he promised he’d call, so he is.  (This has happened to dozens of friends of mine in Munich.)

1) German Guys Will Be On Time for a Date.

Germans are sticklers for being on time. If you agree to meet at a restaurant at 8:00, he will be there waiting at 7:59 and not keep you waiting.  On the flip side, he expects the same of you. So be on time.

There’s no playing “will he show, or not show” games with German men. If he says he’ll be there, he will. You won’t have to worry about trying to convince the waiter that your date is only running an hour late.

2) Your German Guy Will Want to Go on Vacation Together

Most Germans love to travel, and they have a lot of holidays compared to North Americans.  If he likes you, he will want to include you in those travel plans. He may even do all the research and pre-trip planning as well as my partner did when we were dating.

You can impress him by showing that you’ve also done your research by proposing a backpacking trip around Germany. so that you can get to know his country.

On the other hand, if things aren’t going in the right direction,  he will also be brutally honest about why he is ending it.

There’s none of this it’s not me, it’s you. When you’re dating a German man, it’s probably you.

He’ll tell you why he doesn’t like you, or why it’s not working. For better or for worse, you will know where you stand with your German guy.

He will also be honest about whether he likes the gift you’ve just bought him. This is one of the hardest lessons I’ve experienced being an expat in Germany.

You need a thick skin when it comes to dating German men.

Related:  4 Reasons to Turn a Holiday Romance into the Real Thing

No more waiting until Thursday to see if he’s going to call and ask you out for Friday night.  Most German men would never dream of asking a girl out with only one-day notice.

He will ask at least several days in advance,  assuming that you have your life planned out in advance as he does.

He’s also likely to ask you to do something based on a shared interest. For example, going on a hike together.

Germans often meet someone from a common interest group, so if you want to date a German, find a hobby group and attend regularly. Dating is a lot like making friends – it takes time.

Having a German guy = lots of fun, romantic vacations together. I met my then German partner while on vacation.

Just be prepared to pay your share.  Many German guys are all about going “Dutch”.  In fairness to them, this is because many German girls are also about going “dutch” so they’ve used to this.

Besides, he’s probably putting the money he saved for your half of the trip away for your future together. Or his future with someone else as the case may be.

German men like to save money and they can be tight with it. Remind him that flowers from the grocery store are cheap ;).

6) If You’re Living in Germany, He’ll Help You Navigate Through German Bureaucracy

This doesn’t sound very romantic. But anyone who’s an expat in Germany and has tried to get a work/marriage visa, insurance, or file taxes in Germany knows how utterly frustrating it can be.

You’ll be eternally grateful for all of the countless phone calls and visits to the Ausländerbehörde (Foreigner Office) he makes on your behalf.

Related Reading: 14 Wellness Hotels in Germany to Check into for Ultimate Relaxation

7) German Men Do Open Up. It Just Takes a While

Many expat women find German men cold at first.  Germans prefer to think of themselves as reserved.

Regardless, once you get to know a German man, you will see his warmer, funnier side. Yes, Germans can be funny. He doesn’t show this to just anyone, so consider yourself special if he’s showing it to you.

Have you been swept off your feet yet?  No?  Just wait a while. German men take some time to grow on you.

Like when my then partner came home for lunch for the first time in 12 years, because he missed me and thought I might be lonely. Or how he stayed 14 hours straight at the hospital when I had knee surgery.

Or how he took me to castles every weekend when I didn’t have any friends when I first moved to Germany.

Or how he moved to Munich since he thought it would be easier for me to settle in. You get the picture.

German men will show you they care about you in all sorts of ways. You just have to be open enough to see it.

I also recommend this book, the 5 Love Languages.

While it doesn’t offer specific advice for dating Germans, it will help you understand your German guy, or man from any nationality better.