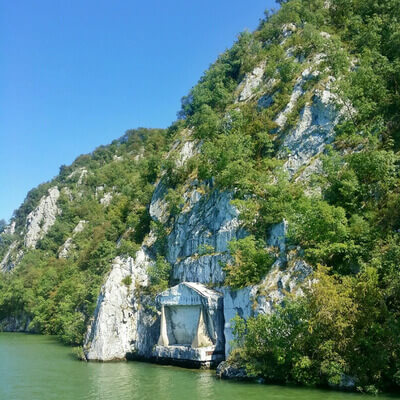 The Danube is the second-longest river in Europe at 2857 km. It flows through 10 countries, including Serbia.

The Danube in Serbia exceeded my expectations. I’ve cycled parts of the Danube in Germany and Austria, but this time, I was on a half-day river cruise instead of cycling. And I wasn’t just cruising the Danube, but also exploring the Roman Emperors Route, a certified European cultural route by the European Institute for Cultural Routes.

The Danube divides Romania and Serbia and is where the Roman Empire established its eastern border. Military fortifications were built to protect from Barbarian tribes crossing the river. I loved the mix of nature – the river on the Serbian side meets the lush Derdap National Park on the part that I explored and history.

My journey departed from the city of Donji Milanovac abroad the Aqua Star Maxim. Regular journeys abroad this ship only depart from Belgrade on Fridays, but you can easily rent a smaller boat, just visit the Tourism Information in Donji Milanovac, who can put you in touch with a local captain. Ideally, you want to do this a few days in advance, to make sure that a captain is available.

1) Cruising a river that divides two countries – Romania and Serbia

This is the Canadian in me coming out, but I love the fact that on the north side of the river in Romania, and on the south side is Serbia! So close, yet two very different countries with their own unique language and customs.

At this point, it resembles more of a lake, than a river. I gained whole new respect for this mighty river. I knew it was the second-longest river in Europe but didn’t realize how wide it was.

Related Reading: Danube Cycling Route: What You Need to Know

Shortly after seeing the river at its widest point, you enter the Kazan Gorge and see it at its narrowest, which makes for dramatic contrast.  Top that with the fact that the banks of the Danube in Serbia are met by the lush Derdap National Park. This is one of my favorite parts of the Danube that I’ve visited anywhere, and that’s saying a lot, as there are some fantastic spots in Germany and Austria that I’ve also visited!

Related Reading: 5 Staycation Ideas That Will Make You Feel Like You’re Actually Travelling

4) Seeing the Danube from the boat.

This sounds strange for me to say, as I’d usually prefer to be cycling the Danube. (Note: the 588 km that run through Serbia are well signed, although on some sections you’re cycling on the highway instead of a dedicated cycle path).

However, on this particular day, I was still recovering from a busy trip to Canada and surgery that I’d only had 5 days before and welcomed the chance to relax and take in the scenery from another perspective.

River cruising is also the only way to see the most important site on this section of the river – more on that later. While I don’t think I’d want to do a multi-day cruise, I did enjoy it for a half-day and really enjoyed being able to easily see the sites on both sides of the river.

Recommended Reading: World Map Wallpaper and Murals: The Top Picks for Every Traveller

This is Europe’s version of Mount Rushmore in the U.S, and is the highest rock sculpture in Europe at almost 40 m! It’s one of the highlights of the Roman Emperors Route.

The only way to see it is by boat on the Danube. Decebalus was the last king of Dacia, which is present-day Romania.

It’s the most important site on the Danube in Serbia. It dates back to 100 A.D. and can only be seen from the river – one advantage of cruising rather than cycling this part of the river.

It was built by Roman Emperor Trajan and commemorates the completion of the Roman military road through the Kazan Gorge.

The beauty of the Danube in Serbia really surprised me. I loved exploring Kazan Gorge, and the historical significance of the river, which dates back to the Roman Empire. Whether you choose to explore it by boat or by bike, I highly recommend it!

Know Before You Visit the Danube in Serbia:

Donji Milanovac is approximately a 4-hour bus ride from Belgrade. It costs 2200 RSD (approx €20) round trip.

My boat trip went to Kladovo, but reaching it requires approximately an hour to get through the Iron Gate Hydroelectric Power Station. You could ask your captain to drop you off in Kladovo or return you to Donji Milanovac.

Arrange your own private boat tour in advance with help from the Donji Milanovac Tourist Office. There are no regular departures from here.

Note: My trip was made possible as part of the Crossing Routes – Blogging Europe 2016 campaign, in the framework of the Joint-Programme between the Council of Europe and the European Commission aiming at promoting the Cultural Routes of the Council of Europe, in collaboration with iambassador. All opinions are my own.

9 thoughts on “Travel Along the Danube in Serbia, the Most Beautiful Part of this River”