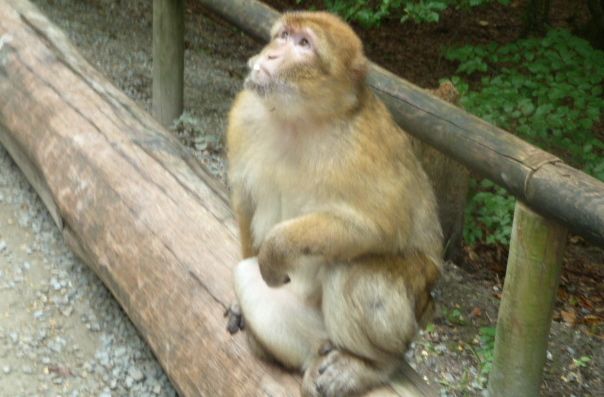 I bet you didn’t think you would find a Monkey Mountain in Germany. But I assure you it’s real and it’s pretty cool if you like monkeys as much as I do.

Where is Monkey Mountain (Affenberg in German)?

Monkey Mountain is not really a mountain but more of a small hill covered in forest. But I was especially interested in it since I have a Bachelor of Science degree in Primatology (the study of primates).

Any chance I have to observe primates, I am there!  I must admit though I was a bit apprehensive. I always want to ensure that I am supporting a place where the animals are well cared for.

Fortunately, I had a friend who had been there and had worked in animal welfare and she had a good impression of it, so off we went.

What To Expect At Monkey Mountain

Upon entrance and an €8 admission fee (children under 6 are free), visitors are instructed to stay on the path and not pet the macaques or harass them in any way.

Once the rules are given, visitors will make their way over to the next staff member who carefully watch as visitors can take a handful of popcorn to feed the Barbary macaques.

They only allow you to feed the macaques that are sitting on the wooden fence, wanting to be fed.  As I tried to lure a baby macaque sitting just inside the fence with a piece of popcorn I was promptly (but fairly) reprimanded by one of the staff members.

It was impressive to see the number of staff members around. They would seemingly appear out of nowhere if someone tried to break one of the rules.

If a Barbary macaque wants to eat popcorn, they know where to get it. This was clear by the rather ample size of some of the macaques.

Related Reading: Are You a Responsible Tourist?

The Monkeys Are Well Taken Care Of at Monkey Mountain

It was surprising but pleasing to disocver that popcorn makes up less than 15% of the Barbary macaque’s diet at Monkey Mountain. That’s a good thing since it’s not what they’d eat in the wild.

In addition to popcorn, they’re fed fruits, vegetables and seeds.  Celery seemed to be the most in-demand vegetable that we saw when we were there.

The Barbary macaques also have plenty of ample room to get away from the visitors. Including a forest on both sides of the visitor pathway. And if you looked carefully you could see the odd Barbary macaque sleeping peacefully in a tree.

Or all of a sudden from the quiet forest leaves would come crashing down beside you as a Barbary macaque made his grand entrance. Subtlety does not appear to be a behavioural trait in Barbary macaques.

In addition to feeding popcorn to the Barbary macaques, we also observed other behaviors like playing which was hilarious watching the young macaques using tree branches in their quick-paced games of chase.

It’s not all altruistic though. They do it in the hopes of getting into their good graces and having them protect them should they ever get into a fight with another member of the group.

For high-ranking individuals, it’s like the equivalent of getting an hour-long massage every day. Ahh, the good life.

Related Reading: How Seeing Lemurs in Madagascar Can Help Save Them

The Conservation of Barbary Macaques

Behavioral research is also conducted there so the site contributes to learning more about these incredible animals.

Monkey Mountain is the perfect place for a day trip from Stuttgart to learn more about these incredible monkeys.