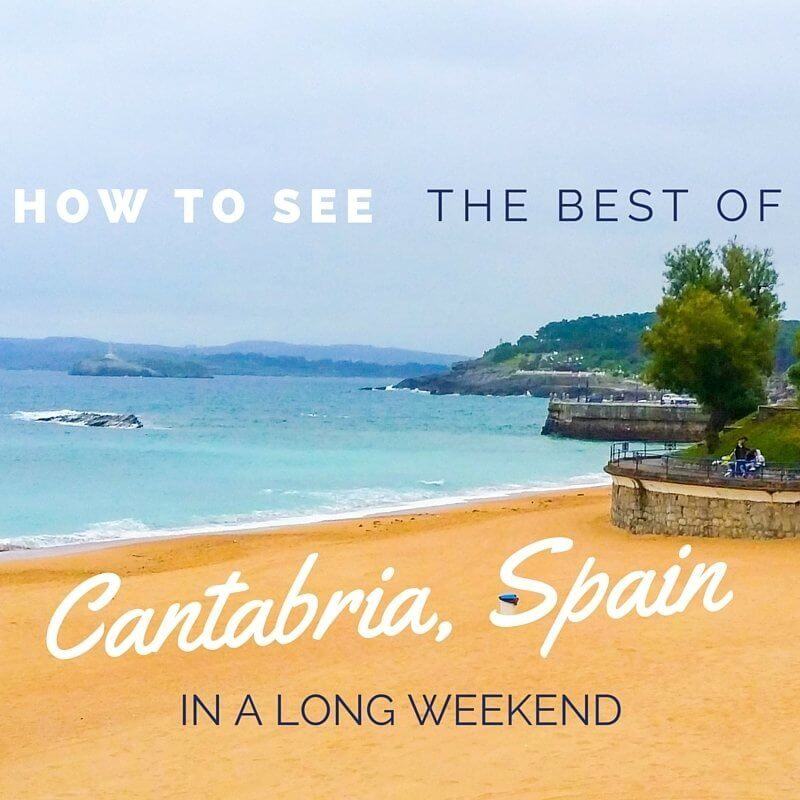 Cantabria is known as “Green Spain” with its natural landscapes, caves and over 60 beaches! Picos de Europa National Park in the Cantabrian Mountains was a particularly fabulous find!

You could easily spend several weeks traveling around Cantabria, and I highly recommend that you do, but here are the highlights if you’ve only got a long weekend:

This seaside port on the Bay of Biscay is a modern town but still retains a medieval center. The gothic-style Church of Santa Maria de la Asunción and the Castle of Santa Ana, which served as a lighthouse in later years, are especially worth checking out.

I also enjoyed walking around the port. In nice weather, watch (or join), local daredevils as they jump off a bridge into a sheltered enclave. You’ll find more things to do in Castro Urdiales here.

The Northern Way of St. James is not nearly as popular as the regular Way of Saint James, (of which I walked the last 100 km), and that’s a bonus in my books. On the short 5km section from Castro Urdiales to Guriezo that I walked, I met more goats than people!

The Northern Way clings to the northern shore of Spain and offers spectacular sea views over rugged cliffs! It normally takes over a month to walk the entire Way of Saint James. Pick a small section to get a glimpse of what you’d be in for, should you choose to return and walk the entire Camino.

I also recommend these sections of the Northern Way in Asturias and the section between Getaria to Zumaia in Basque Country.

Related Reading: What It’s Really Like to Do a Via Ferrata in Spain.

The Cave of Altamira is a UNESCO World Heritage Site featuring prehistoric murals. It’s so impressive that it’s often called the Sistine Chapel of Palaeolithic Art. You can find out more about Altamira from my friend archaeologist Thomas Dawson, who provides his expertise in this special place.

Most visitors, except for a very lucky few, will visit a replica of the Cave of Altamira. At the time of my visit (June 2016), the real cave itself can only be visited on Fridays.

It’s done via a lottery where 20 names are randomly drawn. If you are feeling lucky, you’ll want to go when the museum first opens and let them know you want to be entered into the lottery.

You can increase your chances of being chosen, by going off-season when there aren’t as many people. Check with Altamira Museum before your visit to make sure that the same procedure is still in place so that you won’t be disappointed.

Santillana del Mar, not far from Altamira Cave, is often described as one of the prettiest villages in Spain. It’s also known as the Town of Three Lies. A rumor perhaps started by other villagers who live in a less picturesque village? ;). So what are the three lies? 1) It’s not a saint (Santo), 2) nor is it flat (llana) and 3), it’s not by the sea (Mar) as implied by its name.

Don’t let the lies put you off. Santillana del Mar was my favorite village that I visited in all of northern Spain! I

loved walking along the cobblestone streets lined with historic stone buildings and balconies filled with cheery flowers. I easily could have spent several hours just wandering and soaking up the medieval atmosphere.

For pilgrims, Santillana del Mar is an important stop since the Collegiate Church of Santillana is found there. This Romanesque monastery turned church is the largest on the Cantabrian coast and home to Saint Juliana’s relics.

More than 60 beaches line the Cantabrian coast. You won’t have to look hard to find a beach, now choosing which ones to visit? That’s another story!

That doesn’t mean it’s easy though. It’s rugged mountainous terrain through Picos de Europa National Park in the Cantabrian Mountains. I just walked a short section of the Camino Lebaniego, but this pilgrimage is calling me back and is at the top of my Must Hike List!

Related Reading: 7 Things That Will Wreck Your Trek

Related Reading: How to Prepare for a Hike: Experienced Hikers Share Their Tip

Picos de Europa was my biggest surprise while traveling in northern Spain. I had no idea that such a park existed, let alone the scale of it!

The UNESCO Biosphere Reserve in the Cantabrian Mountains is one of the two first national parks in Spain, founded in 1918. You can find over 200 spots in the park where mountain peaks are over 2000 meters high! The highest is Torre de Cerredo at 2648 meters.

Picos de Europa is also home to a variety of protected species that I was surprised to find exist in Spain – like bearded vultures, Cantabrian brown bears, and the Iberian wolves! And keep your eyes peeled for Picos de Europa’s most representative animal, the Pyrenean Chamois, a type of antelope goat!

Despite that it rained while I was there and was covered in clouds – a common occurrence since Picos de Europa is just 20km away from the sea, it was still stunning, even when partly covered. I’m taking it as a sign to return when Picos de Europa will show itself from beneath the clouds.

Picos de Europa is still worth a visit even if hiking mountains aren’t your thing. The drive along the Cares River through the Garganta Divina Ravine is simply stunning. That’s even truer when viewed from a high vantage point like the one pictured below which we drove to:

You can also take the Fuente Dé cable car, which takes you up to 1800 meters! I’m sure the views are spectacular, but all we saw were clouds the day I was there. Still, there are two cafeterias at the top, so you can always try to wait out the weather.

To best explore Pico de Europa National Park, you’ll need a car. I LOVED this park and can’t wait to come back and explore. I could easily spend a couple of weeks here alone!

This Roman Catholic Monastery in the Cantabrian Mountains dates back prior to the 6th century. Perhaps even more impressive, it’s just one of the five places of Christianity that, together with Rome, Jerusalem, Santiago de Compostela, and Caravaca de la Cruz, has the privilege of perpetual indulgences.

I.e. the way to cut the amount of punishment one has to undergo for sins) (Wikipedia). It’s also home to the relic of the left arm of the True Cross.

You can probably see by now, a long weekend in Cantabria is only a small glimpse into Green Spain.

There’s so much to see and do, but it will be enough for you to realize that you’ll want to come back. Who wants to search the Cantabrian mountains with me for the Pyrenean Chamois?

Related Reading: Everything You Need to Know About Water When Hiking or Trekking

Where to Stay in Cantabria:

I stayed in Santander, the capital of Cantabria for one night. It makes a good base for exploring, but I would also recommend staying in one of the smaller villages.

Santillana de Mar or Comillas are good choices.  I highly recommend the boutique hotel Pasada Torres del Milano just a few kilometers away from Comillas and love the personality of the place.

It was one of my favorite stays the entire trip!

What to Eat in Cantabria:

It’s no surprise that seafood and fish are daily staples as a result of Cantabria being located right on the coast. Be sure to try seafood tapas. My foodie friend Lauren also recommends Cantabrian cheesecake (Quesada pasiega) for dessert! 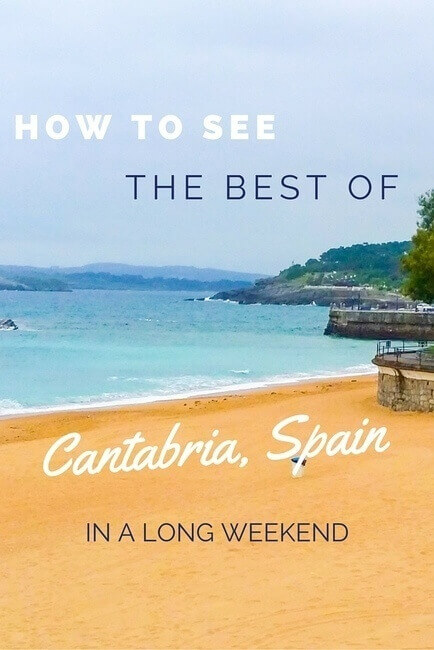 Cantabria was the perfect weekend getaway, the only regret I have is not being able to stay longer.

Disclosure: Many thanks to Cantabria Tourism Board, the Spain Tourism Board for the UK and The Travel Mob for making my visit possible. As always, all opinions expressed are my own.

4 thoughts on “What To Do in Cantabria, Spain Over a Long Weekend”