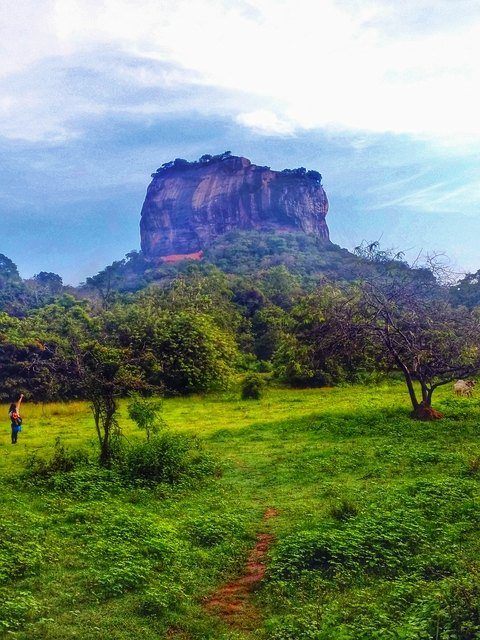 When I first told a friend I was going to Sri Lanka, her first question was Are you going to climb that rock? That rock, she was referring to is called Sigiriya Rock, or Lion Rock.

Sigiriya is the most visited historic site in Sri Lanka and one of the country’s eight UNESCO World Heritage Sites. 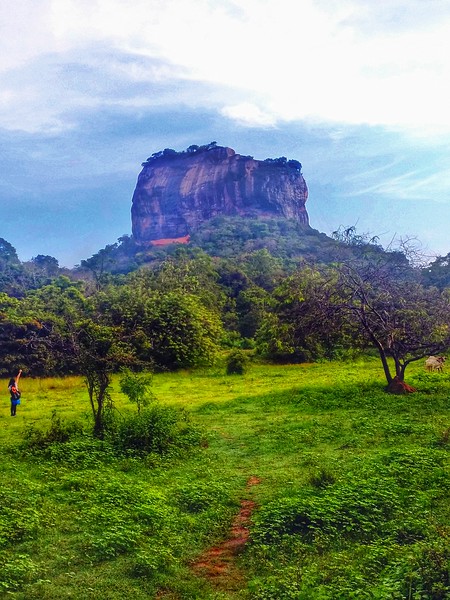 What is Sigiriya or Lions Rock?

And yes I did climb it!  Sigiriya Rock is an ancient palace that can only be reached by climbing the almost 200-meter massive rock massive.  Now seeing ancient palaces isn’t usually by the goal of climbing mountains, but I was definitely game and this was definitely a unique experience, plus I LOVE castles…even if all that is left are palace ruins.

Related Reading: 17 Photos That Will Make You Want to Travel To Sri Lanka

At one time Sigiriya, Lion Rock was the capital.  King Kasyapa built his royal palace on top, which seems rather fitting for a king.  Or perhaps he was health-conscious, or more likely he feared vengeance from his brother after he killed his father – oops!  Climbing up and down Sigiriya Rock every day is a great way to stay fit!

After the king’s death, the palace and capital were abandoned and later on it was used as a Buddhist monastery. As I made my way up the seemingly endless stairs, I was greeted by several stray dogs whose ribs showed through.  If you’re an animal lover like me, it’s heartbreaking! Fortunately, the other highlight of visiting Sri Lanka is observing elephants, and leopards – both species which are doing relatively well in Sri Lanka.

I was most excited to see Toque Macaque which is endemic species in Sri Lanka. In the frey of the tourists, I noticed a tiny baby Toque Macaque. Fortunately, though there was a mother who appeared to be taking excellent care to her clinging infant as she/he clung to her chest and she kept her distance from tourists.

What to Expect at The Top of Lions Rock

Today all that remains are the outline of where the palace once stood.   After you’ve oohed and ahhhed over the view of the lush plains stretching to the mountains, take a few minutes and plop yourself on one of the brick ruins (it’s allowed).  Take a deep breath. I found Lion Rock to be serene and calming, whether it’s the leftover energy from the monks or the gratitude that you have for not having to climb any more stairs, I don’t know.  But I do know that as I started to make my way down, I was left with an All is right in the world type of feeling.

Related Reading: How to Prepare for an Ayurvedic Retreat and What to Expect

5 minutes later that changed. I had heard about the giant wasps and someone had pointed out their equally giant nests clinging to the cliffs but assumed they had been exaggerated.  As I entered into a swarm of wasps, I quickly realized the legends were true.

A local ahead of us instructed to sit down and be quiet.  Apparently noise irritates the wasps.  We waited in silence for a few minutes and the wasps disappeared. Disaster averted! At the bottom, there are vendors selling handicrafts and ice-cream!!!! Covered in sweat, I pulled out an equally sweaty 50 rupee.  At that moment I thought that ice-cream was as good as it gets…until I spotted several monkeys!

And that is as good as it gets for me…monkeys and mountains in one morning!!!

Make the Most of Your Visit to Sigiriya, Sri Lanka:

I stayed at Chaaya Village Habarana.  I really enjoyed the natural feel of this property where guests are greeted with cinnamon-scented wash clothes and the open-air lobby and restaurant.  The property really does resemble a village with the thatched roof huts that guests stay in. Trees line the ample property and monkeys and giant squirrels are frequent visitors!  Even the paint used is in harmony with nature and is mixed with mud! If you’re seeking something more lavish, then try the Cinnamon Lodge Habarana. You can find both properties at Cinnamon Hotels. You can read my review of my stay here.

How To Get To Sigiriya, Sri Lanka

Sigiriya is approximately a 3-hour drive from Colombo, Sri Lanka.  If you’re short on time, then consider a Cinnamon Air flight, which only takes 30 minutes.

Sigiriya was one of the most beautiful places I visited in Sri Lanka. It had everything I love, Monkeys and Mountains.

Note:  Thank you to Cinnamon Hotels and the Professional Travel Bloggers Association for making my visit to Sigiriya possible. As always, all opinions are my own.


This site contains affiliates in which I earn a commission at no extra cost to you.