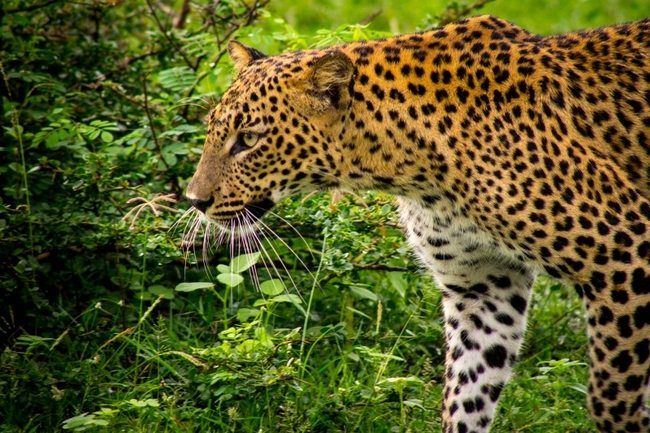 Yala National Park in Sri Lanka has the highest population density of leopards in the world!  If you want to see a leopard, there is no better place!

Yala is Sri Lanka’s most visited national park.  Ironically, it previously served as hunting grounds for the British elite.  The park is divided into five blocks.

Not all of them are easily accessible to visitors.  The most popular one is Block One which is home to approximately 40 leopards!

While Yala is known for its leopards, it’s also worth noting that there are 44 species of mammals (including elephants). And an incredible 215 bird species live in Yala.

Wildlife tip:  Appreciate what you see!  Your chances of seeing a leopard are good, but they are wild animals, so it’s also possible that you won’t see one.

So many people are focused on only seeing a leopard that they get blasé about what would otherwise be considered really incredible animal sightings. Watch for an upcoming post about the other wildlife you can see in Yala!

But for now, I’m going to focus solely on the leopards. I can see you saying, Yeah, yeah, I know, there’s other wildlife, but tell me about the leopards. And of course, how likely I am to see one.

Leopards eluded me on my previous four trips to Africa!  On three separate occasions, I had seen fresh leopard tracks. And once even minutes old poop, but no leopard!

The most frustrating experience was at Tembe Elephant Park in South Africa. We kept spotting fresh tracks on the road, that would disappear into the bush, then reappear again.

This went on for over 90 minutes! It seemed as if the leopard was playing a game of cat and mouse. And one that he clearly won!

When trying to decide which national parks to visit in Sri Lanka, I choose Yala for one reason:  leopards!  I hoped that on a new continent, they would not continue to elude me and be into playing games!

I saw one leopard the first time, three leopards (a mother and her cubs) the second time and two leopards the third time! My luck was truly incredible! Not everyone is lucky though. My friend Sherry from Otts World, had no such luck spotting a leopard.

That’s why I recommend more than one visit to Yala. It will significantly increase your chances of spotting a leopard. And don’t forget the other wildlife.

I will admit that the first sighting was far away. Even with our guide pointing him out to me in the tree approximately 30 meters away, it still took me about 10 minutes before I could find it.

My second time in Yala, I was visiting with Leopard Trails, and I got closer, approximately 15 meters away.  Our jeep was fortunate enough to grab a good position. While I didn’t get a photo of the mother and both of her cubs, I did get one of the cubs who was moving around a bit through the bush.

My third time also with Leopard Trails was a matter of being in the right place at the right time.  We got a call about a leopard sighting. Fortunately, we were just a few meters away.

The leopard cub was in a tree just a few meters from the road and we were one of the first jeeps to arrive.  Despite being so close, he was still difficult to see as he was so well hidden by the leaves. 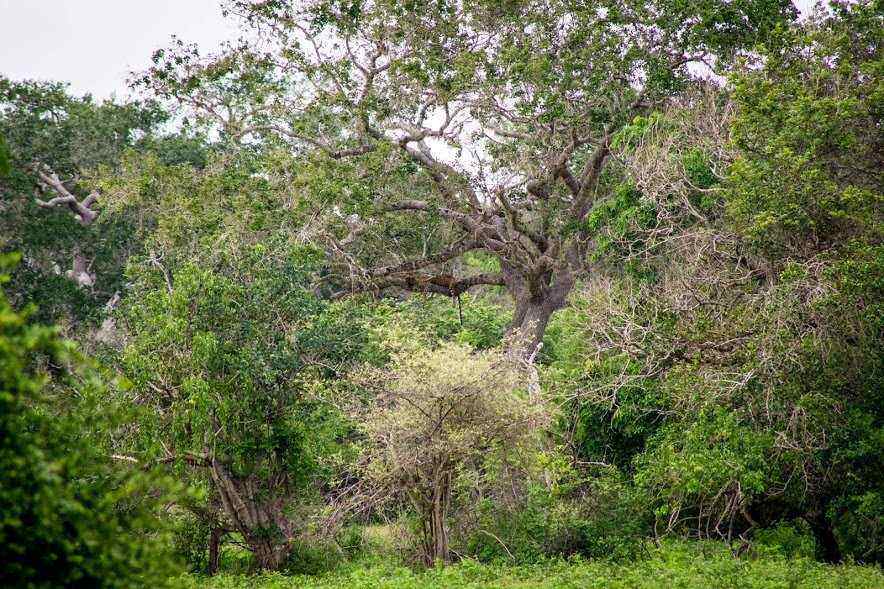 A few of the jeep drivers got excited and pulled in closer and closer to give their guests a better viewing opportunity. This agitated the poor leopard. He then decided to seek out solace. That meant he had to climb down the tree and cross the road which was several meters from our jeep to meet up with his mother!  This resulted in a leopard viewing of a lifetime: 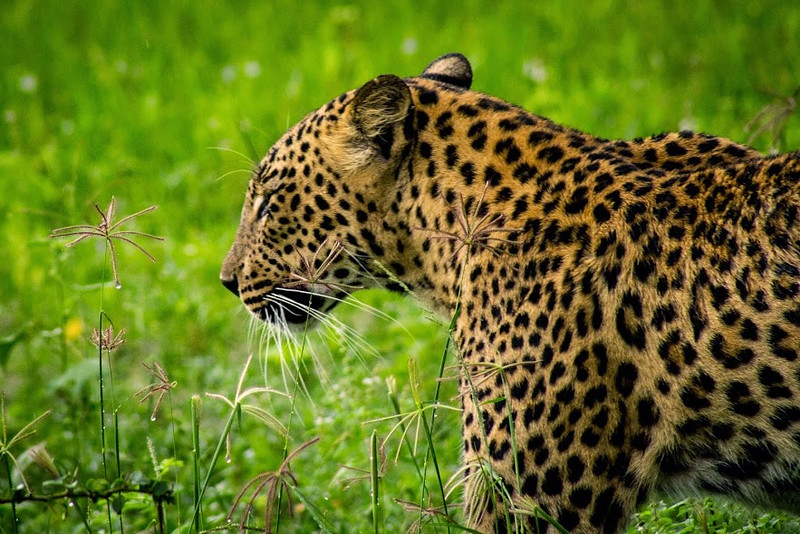 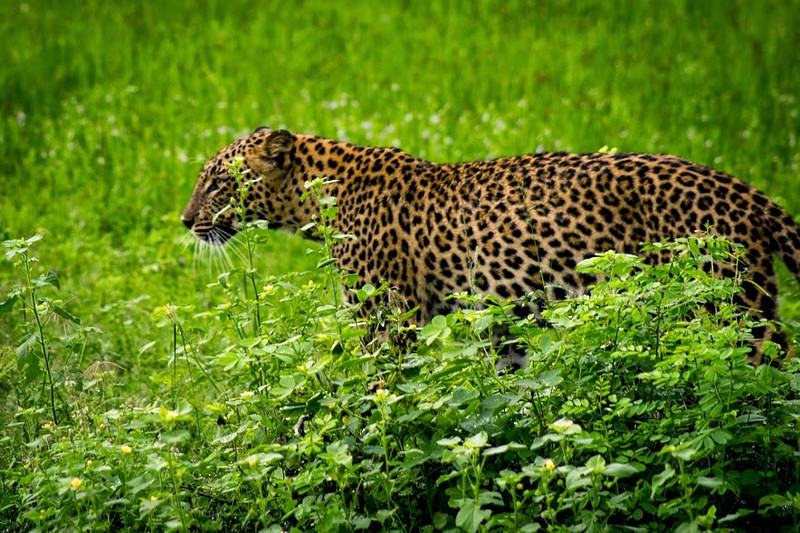 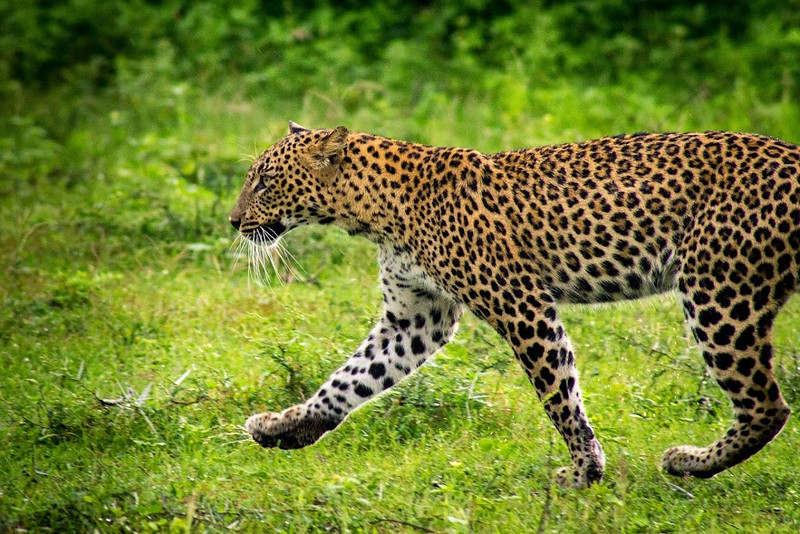 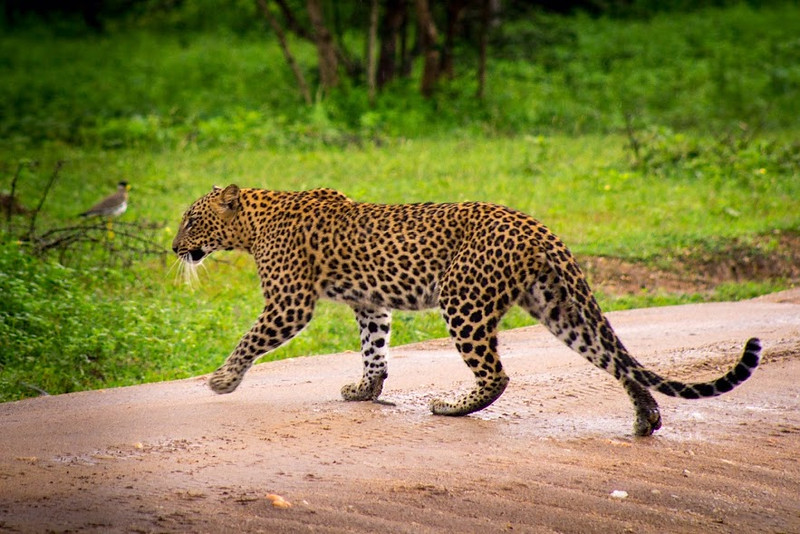 The Downside of Seeing Leopards in Yala

Having said that, I felt and still feel bad for the leopard.  Our guide Jerome sadly shook his head and said; In 10 years it will be virtually impossible to see a leopard in Yala. We will have scared them all away.  Unfortunately, I have to agree with him.

I loved my time in Yala but was very disappointed to see how little respect some of the drivers had for wildlife. Most got way too close or revved their engines trying to get the leopard’s attention.

And it’s not just one or two jeeps, there are dozens of them, resulting in jeep jams along the road. I  get that everyone wants to see a leopard. I know I certainly did. But not at the leopard’s expense. And not when we are interfering with their natural behaviour.

Had all the jeeps stayed a few meters further back on the road, it’s likely the leopard would have stayed undisturbed in his tree. Given the choice, I would have gladly sacrificed my photo opportunity for the wellbeing of the leopard

That’s why I strongly believe it’s crucial to visit Yala with a reputable company that employ experienced eco-minded guides like Jerome. They’re responsible for letting the drivers know if they are getting too close. It’s easy to put all the blame on the Sri Lankans.

You could say they need better-trained drivers and to have enforced guidelines about how close a jeep is allowed to get to wildlife. Or limit the number of jeeps allowed in the park at one time.

Tourists as Part of the Solution to Overcrowding Leopards

While these certainly may be part of the solution, eco-tourists also have to take some responsibility. The drivers and guides are catering to our needs as tourists advise the guides Closer, closer, I can’t see around the other jeeps, and I want a better photo.

I must have heard some variation of this a hundred times. More often than not, the driver would comply if they could. I can understand why. They knew that they’d likely get a better tip for doing so.

Instead, we need to think about what’s best for the animal. And just about our photo opp. Also, ask the driver to back off a bit to give the animal room if he’s getting too close.

Tourism is just returning to Sri Lanka after a long civil war. here’s much to be learned from both sides. As such, as eco-tourists we also have a responsibility.  It’s in the best interest of wildlife and Sri Lankans if can ensure that future generations will have the same incredible leopard spotting opportunities that I had. It was honestly one of the most AAAAMAZING wildlife encounters I have ever had!

Know Before You Go Leopard Spotting in Yala National Park:

Note:  Two of my trips to Yala were made possible by Leopard Trails.  As always, all opinions expressed are my own.