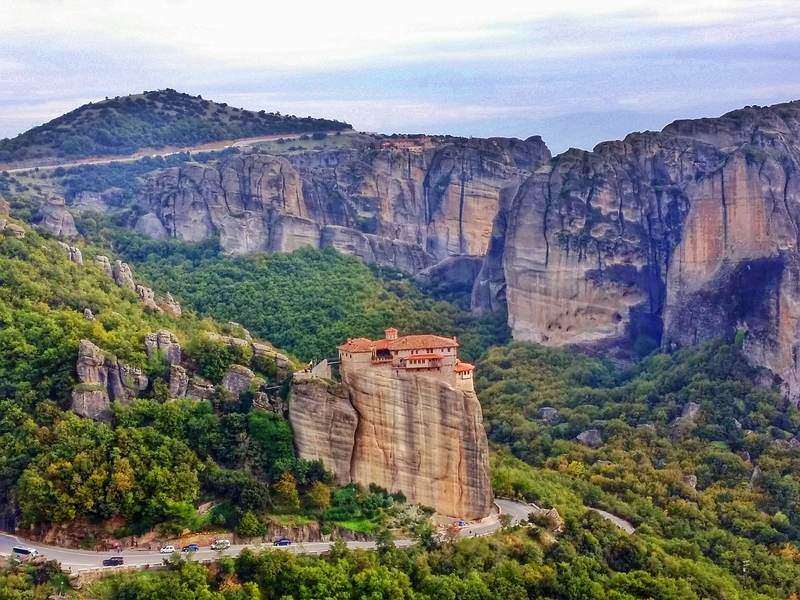 Meteora is home to six mountaintop monasteries and is home to adventure-seeking monks. They’re worth a visit even if you’re not religious. I found them absolutely fascinating.

The Meteora Monasteries are a site that is about so much more than just travel, it is all about a complete experience. An experience that will have you coming back for more. Meteora has an otherworldly appearance. It doesn’t look as if it belongs on this earth, and perhaps it doesn’t.

The name Meteora comes from the word Meteor that means suspended, which is what the monasteries atop the natural sandstone massifs appear to be.

Here’s what you need to know about Meteora’s Monasteries:

1)Meteora is the second most important site in Greece. The Acropolis is first!

It’s one of only a few UNESCO sites in the world that qualifies for more than one category!

3) At its peak, there were 24 active monasteries in Meteora. Now there are 6. There are now only 20 monks and four nuns remaining. The decrease in monasteries is due in large part to the increase in tourism, which is less than ideal for a monastic lifestyle.

You can book your tour to Meteora here.

4) Monks came to Meteora in the 14th century searching for a safe place. Back in the day, there were only two ways to reach the monasteries: by rock climbing the vertical sandstone columns or being hosted up 373m in a basket made of rope.

Seriously, what a choice!  Regardless either qualifies as an adventure, don’t you think?

5) There were no staircases in the Meteora monasteries until the 1920s! This fact alone makes me believe that the monks were thrill-seekers, especially after seeing for myself how high the monasteries are.

6) Meteora is the second largest monastic community in Greece. The first is Mount Athos.

8) If you get lost in Meteora, you can find your direction by looking at which direction the altar is facing.

It always faces east to meet the rising light.

9) Everyone is welcome to attend religious services. However, if you’re not Greek Orthodox, you can only attend the pre-temple. You also won’t be able to take part in communion.

10) There are two types of monasteries in Meteora –  communal and living as a hermit. Which would you prefer?

The communal ones all seem to have cats, so that would be my choice!

11) There are 41 hermitage spots in Meteora, but they are difficult to impossible to find on your own as there are no signs. I highly recommend going with one of the fantastic guides from Visit Meteora.

You can book one of their tours here. Pictured above is one of the long-abandoned hermit caves on the Rock Forest Hike!

12) There was even a monk jail in the Meteora monasteries. Each monk had his own separate “cell”. You can see what a monk jail looks like here.

13) St. George is the most famous hermitage site in Meteora. According to Visit Meteora… In the 17th century, a local Muslim landowner cut some trees from the sacred forest that was dedicated to Saint George.

The Saint then caused the paralysis of that man’s hand, but he was cured after he offered to the Saint his wife’s veil, a most valuable gift according to the Muslim religion.

To symbolize that act of donation honoring Saint George, believers hang colorful scarves once a year on a rope supported by trees, near the cave’s entrance.

Young men from the neighboring village participate in an annual climbing competition and carry down the old scarves which they then keep at home as a token of good health.

14) Women were not allowed in the Meteora monasteries until the 1920s. And that was only because local village women helped put out a fire!

15) Queen Marie of Romania was the first official woman visitor in 1921!

16) Meteora is a land of legends! One of my favorites happened in the 15th century. The monks were at service, and when they came back, a family had moved into their monastery.

It’s believed that the monks were unable to recapture it because it was a large family with lots of boys and weapons. The family remained in the monastery for 87 years!

Finally, the monks were able to take it back, but nobody knows how. There was no law and order back then!

17) Meteora appeared in the James Bond film, For Your Eyes Only. Look familiar?

19) Every rock in Meteora has a name. It made life easier for the locals, just as street names do today.

Meet me under the Spindle? Or should we say Devil’s Tower?

20) Meteora has a 35 km long hiking trail network that includes great views of hermitages. I LOVED my hiking tour to Holy Spirit Mountain (pictured above), which also included a visit to a monk jail.

There are no signs, so you do need to go with a guide, but you’ll also want to.

Storytelling is alive and well in Meteora.

Be sure to check out this video of hiking in Meteora by my friends Dave and Deb, from The Planet D.

22) Many visitors think a half-day is enough to visit Meteora. They couldn’t be more wrong. I know, because that’s what I did on my first visit to Meteora.

Yes, the Meteora monasteries are incredible, but so are the hermitages and those you can only visit on foot. Give yourself 3-4 days in Meteora to let the legends come alive!

I stayed at the Divani Meteora Hotel.  It’s a contemporary luxury hotel with views of Meteora, located in Kalambaka! I especially loved the lobby. There were so many cozy spaces, including one with a fireplace. I spent a lot of time hanging out there.

Where to eat in Meteora?

I enjoyed each of the restaurants mentioned below. I’m a sucker for saganaki and didn’t think it could get any better, but it did.

Here your eyes do the choosing! Guests meander to the kitchen and choose the dishes. Each day they vary. It’s been run by the Gertsou family since 1925. At the time of writing it’s ranked the #1 restaurant on Trip Advisor in Meteora. Address: Town Hall Square, Kalambaka.

Taverna Gardenia is where the Greeks go to eat! It’s known as one of the best places in Meteora to experience authentic Greek cuisine. Address: Near the church, Kastraki, Kalambaka.

Meteoron Panorama may be the most romantic restaurant in Meteora. It has a large terrace offering the best views in town. It is slightly on the expensive side, but it’s a restaurant that I would return to over and over again for the ambiance. Reservations recommended. Address: 54, Patr. Dimitriou, Kalambaka.

Friendly service where staff is happy to recommend Greek dishes to you. Both indoor and outdoor seating is available at this Greek tavern. Address: Trikalon 13 | Riga Fereou Square, Kalambaka.

A family classic Greek tavern where you can listen to traditional live Greek music and possibly even learn how to dance Greek-style – SO much fun – Opa! Address: Patriarhou Dimitriou 14, Kalambaka

You won’t find this mushroom meal on the internet because it’s so new. The Mushroom Museum in Meteora in conjunction with Neromilos Restaurant can arrange a museum tour, along with foraging for mushrooms, AND a meal made entirely from mushrooms.

I confess to not particularly enjoying mushrooms before this experience, but this meal was a  game-changer. I couldn’t believe all the creative ways you could cook with mushrooms.

It was one of the most memorable meals of my life and that’s saying a lot consider all the food I sample when traveling.

Currently, it can only be organized for groups, but that may change. Inquire beforehand and beg if necessary!

What tours can you take in Meteora?

You’ll find a list of tours that you can do here. Most of the hiking paths are unmarked, so you’ll need a guide to find cool places. Greeks are incredible storytellers, and there are so much history and folklore that you’ll want a guide even if you’re not regularly a guide person.

Where is Meteora located?

You’ll find Meteora near the middle of Greece, just north of Trikala.

How do you get from Athens to Meteora?

You can also take a train from Athens, then meet your guide in Meteora. Be sure to check out these Greek quotes that are perfect for a road trip to Greece!

Consider exploring Mount Olympus National Park or the mountains of Epirus! Both of these regions are stunning and not what I expected from Greece.

The Meteora Monasteries are definitely a recommended visit if you love mountains, hiking and a little bit of mysterious history.

Note: Many thanks to Visit Meteora for making my visit possible. As always, all opinions expressed are my own. They did not require me to rock climb or take a basket to visit the monasteries, they kindly drove me.