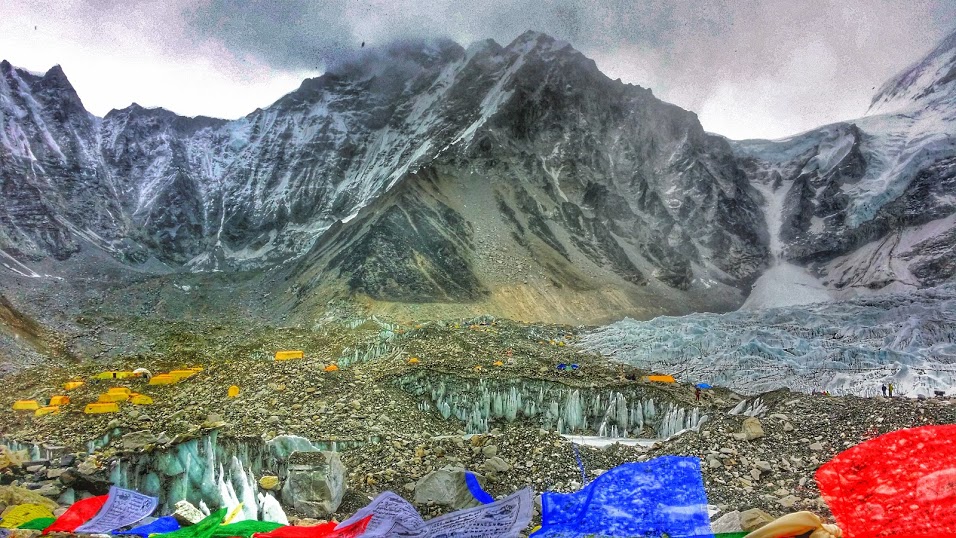 Have you ever considered the cost involved to climb Mount Everest? It is a lot more than just the money that you need to consider.

I set out to hike to Everest Base Camp several days after the deadliest incident in Mt Everest’s history. 16 Sherpas had died in an avalanche. It made me wonder about what Mount Everest expeditions really involved.

It was a surreal time filled with mixed emotions.  My heart went out for the Sherpa who had lost their lives and for their loved ones. The selfish part of me was excited about my own adventure about to begin.

Rumors and misinformation spread along the trail like a rapid-fire.  Porters returning from Base Camp would relay information to other porters and guides. And so began what reminded me of the telephone game I played as a child.

We would hear tidbits of information about the future of the climbing season and whether Mt Everest would remain open.  Several days later the conclusion came – Mt. Everest would be closed for business for the rest of the year – at least from the Nepali side. (There’s an alternative way up through Tibet.)

The Business of Climbing Mount Everest

Business may seem like a strange word to use to describe climbing the world’s highest mountain. But make no mistake, climbing Everest is big business.  The cost to climb Everest for the average climber between $40,000 – 50,000. For some, the costs can even climb as high as $100,000!

When I first heard that Everest was closed for the season this made sense to me given the severity of the tragedy. Our Yomads guide, Sujan, had lost a friend and former colleague in the avalanche. He had promised his wife and children that this would be his last Everest attempt. He had reached the peak successfully on seven previous occasions. Sujan confirmed this saying that the Sherpas had lost their confidence.

When 16 very competent climbers, some of the best on the planet,  all lose their lives, how can it not shake the confidence of all climbers? Especially those who would be climbing the Khumbu Ice Fall, the exact same route which claimed so many lives just days before? It put into perspective the immense risk it was to climb Everest, It could cost you your life.

It was for this very reason that some Mount Everest expeditions closed up shop without waiting to hear what the outcome of the climbing season would be. One expedition alone had lost three Sherpas devastating their group.  They departed Everest Base Camp shortly after the tragedy.

Rumors soon spread while we were hiking towards Base Camp that Sherpas were signing a petition showing their support for closing the climbing season out of respect for their fallen friends and colleagues.  No one along the trail that I spoke to questioned the motives, it seemed reasonable.

It was only after a chance meeting at Starbucks in Lukla – not the chain which I disdain, but to an actual lovely coffee shop.   I spent several hours here drinking far too many cappuccinos making up for my lack of them on my 12-day trip with Yomads – plus they had free Wi-Fi!

What Was Really Going On At Base Camp

But I digress.  It was at this Starbucks that I had a chance encounter with Belgium climber Dr. Phil Damien François.  I soon learned that he had been one of the would-be climbers attempting Everest until it had been closed for the season.  Along with Dominic, a Swiss journalist who was also on my Yomads trip, we were soon shooting him questions left and right.

It became very clear with minutes of speaking to Dr.François that he said what he thought and couldn’t care less who disagreed with him.  I respected his honesty and forthrightness.  Not having been at Base Camp the time of the accident, I still don’t know if I agree with everything he said, but I respected that he challenged my assumptions – which he quickly did.

Dr.François was angry about being robbed the opportunity to attempt Everest!  Not out of disrespect for the Sherpas who had died, but because of the events that transpired the next day.  According to Dr.François the following day after the tragedy, one Sherpa rallied the other Sherpas to sign the petition convincing them they could go on strike and then rally for a higher salary for the following year.

In addition William said that many of the Sherpas didn’t realize what they were signing. This is what enraged him.  That instead of mourning the loss, someone was…using the dead for political and personal purposes…. – the day after the deadliest day on Everest. Check out what he said in his own words in the two videos below (Excuse the layout of the first one, in the excitement I held my phone the wrong way:

(It’s worth noting that he does have a softer side.  Talk to him about his cat and he’ll show you pictures with proof that his cat is also a climber – we bonded over missing our cats and trying to help this cute cat we saw stuck in the rain.)

Why Were The Sherpas Protesting?

Dr.François reported that the over before it had really begun Everest climb had cost him $30,000. This was consistent with two other climbers I spoke with.  But seeing how much climbers pay to climb Everest, one Sherpa wanted a larger piece of the pie.

According to a report by the BBC, the Sherpas were protesting against the Nepali government who receives a large chunk of money through the climber’s fees and not the climbing companies themselves but this is up for debate.

According to Dr.François who has spent considerable time in Nepal and was working on a documentary titled The Cho Oyu Project. The World of the Sherpa After Hillary, which has now been canceled, (watch for his book on Nepal coming out in June 2014) the average Sherpa can make a salary in four years that is more than what 60% of the rest of the population of Nepal can make in a lifetime.

Now surely the Sherpas should be paid a reasonable amount.  Sherpas are some of the most highly skilled climbers on the planet. And they are risking their lives every time they set foot on the mountain. In recent years more than ever as they support incompetent paying climbers.

But how much is reasonable?

How much of the Everest pie are the Sherpas entitled to? It’s a question I don’t have an answer to.  There’s no doubt that the fame of Everest has brought if not riches to the area then at least the highest standard of living in Nepal outside of Kathmandu.

Admittedly this wasn’t directly obvious to me as I noted the only source of power for the higher-up villages was solar-powered electricity. Wood stoves are heated with dried yak dung. We hovered around in the evenings for warmth. It certainly didn’t seem lavish, by any stretch of the imagination, but then I guess that tells you how poor the rest of the country is. 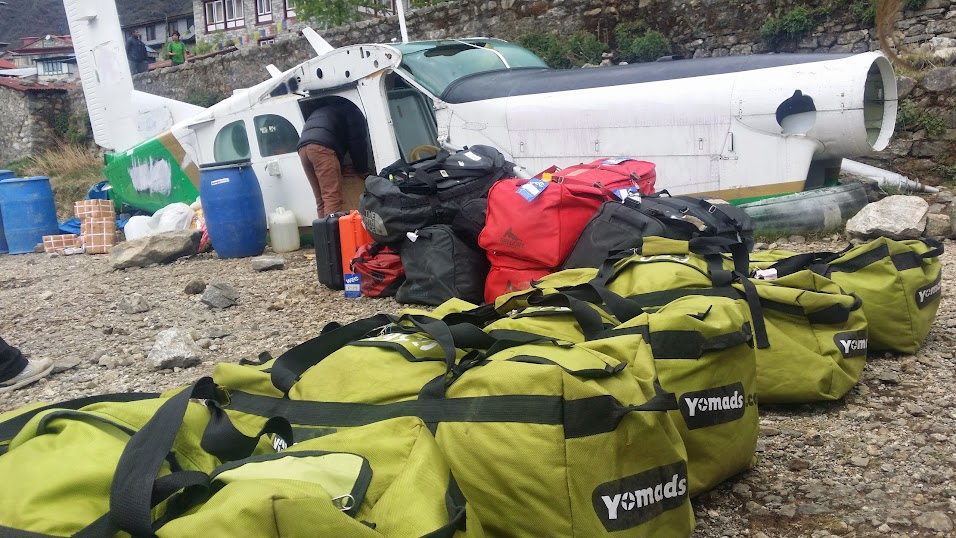 You only have to look at all the hundreds of porters you pass – or more accurately who pass you while carrying massive loads of hiker’s and climber’s gear along with supplies to the guest houses supporting the tourists to realize that eco/responsible tourism is having a direct impact on their lives.

But is that all about to change?  From my conversations with Dr.François and Will Sayer a cheery Australian, who was attempting to be the youngest Australian to climb Everest, they both admitted that Everest was becoming less of a climber’s mountain.

All in the name of the mighty dollar, anyone can climb Everest. Or at least attempt it if they can afford the hefty fees.  Sayer reported observing a Sherpa showing a climber how to use crampons -the spikes that are essential for ice climbing.  Jon Krakauer had reported seeing the same thing in his best-selling book Into Thin Air.

Both climbers admitted that there were people in both of their expeditions that they didn’t feel had the appropriate climbing experience to be attempting Everest.  And the danger in that is not only endangering their own lives but those of everyone on the mountain. Especially the Sherpa whose job it is to get each climber to the top – no matter what the climber’s incompetence is!

Anyone Can Climb Mt. Everest

What amazes me is that there’s actually a relatively simple solution to weeding out eager yet incompetent climbers. If you want to use a climbing wall in most western parts of the world, you have to pass a belay test – showing that you know how to tie the knots and can support a climbing partner.  This is a completely reasonable considering that a fall off the wall due to an incorrectly tied knot could be fatal. But for Everest, in which the dangers are much, much higher, no such test is in place. Anyone, including someone who has never worn crampons before, can attempt Everest.

Admittedly the lack of competency test is par for the course for mountaineering. Climbers are left to their own devices to ascertain their own abilities.  And if they get it wrong or are overconfident, the consequences can be fatal. But if completely baffles me that on Everest, which is becoming increasingly known for its traffic jams, such a competency test doesn’t exist. And why doesn’t it exist?

In its defense, why would Nepal a poor country where poverty runs rampant, want to turn down well-paying customers?  Turning these inexperienced climbers away doesn’t make good economic sense – even if the ultimate price is paid. This again solidifies the fact that the cost to climb Everest is far higher than untrained climbers consider.

Unless procedures change, both  Dr. François and Sayer predict that Everest will become less and less of a true climbers mountain. They believe that it will become more of a hobbyist climber’s mountain.

So What Makes You Accomplished Enough For a Mount Everest Expedition?

Even Sayer an accomplished climber in his own right (and who you definitely want on your team during an afternoon of board games as I discovered while waiting for our helicopter rescues in Lukla) ascertained that after some thought he wasn’t experienced enough.

And that’s despite successfully summiting several more technically difficult mountains than Everest.  (Check out his list of impressive climbs on the link above) When I asked him to elaborate, he said that while the technical ability is important, it’s only one element.

Altitude and endurance also play key roles. After arriving at Base Camp which is ~ a week hike in itself (and what I did), it takes on average about 40 days to reach the summit and return – allowing time for acclimatization.  Then the actual summit day can be extremely long, not to mention the 8000+m.

Sayer wants to become more experienced in these areas before attempting Everest again. He plans to do in a couple of years. Check out his perspective on the Everest tragedy in his own words:

Dr.François is less optimistic and has no plans to return.

The Mount Everest expeditions were closed for the year. It sure did make you consider what it really cost to climb Everest.

Note that Everest Base Camp is reached by 8 days of hiking (plus an additional 4 days to return). It is the starting point for climbers actually attempting to climb Mt. Everest. This is what I did and was never in any danger of avalanches.

4 thoughts on “The Business of Climbing Mount Everest”