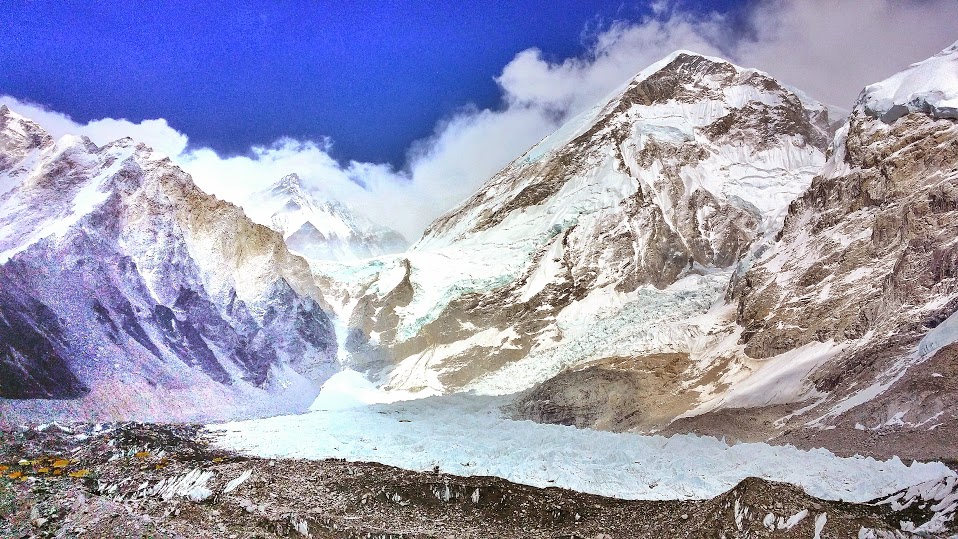 The Everest Base Camp trek. What’s is it really like each day? Read on to find out more about the EBC and what you can expect.

I did Everest Base Camp (also known as the EBC trek for short) with Yomads, which specializes in unique travel experiences for the 20s and 30s.  You can read a short review at the end of this post – hint – I recommend them! Our trip included a couple of days in Kathmandu as well, which I’ll discuss in another post – hint there were monkeys!!!!!

It’s important to note that trekking to Everest Base Camp is not the same as climbing Everest.  Everest Base Camp is where the climbers stay.  It’s their home base and the beginning of their difficult journey, while it marked the end of mine.  You can read more about the Business of Climbing Mount Everest here.

While doing the Everest Base Camp trek, I jotted down notes in my journal describing how I found each day of the trek.  The intent is to show you how much hiking you do each day so that you can decide if it’s right for you.

This is an honest day-day account of how I was feeling.  Note:  I suffered from altitude sickness and got sick, and while most people will feel the altitude a bit, a lot of people feel more or less fine and don’t experience it to the extent that I did, so don’t let that scare you:

We fly from Kathmandu to Lukla, then hike to Ghat (2530m), ~ 2 hours of hiking.  This was the most beautiful scenery I’ve ever seen on a flight.  Travel tip:  Sit on the left side of the plane for spectacular views and hang on tight when you land in Lukla – it’s one of the most dangerous airports in the world!

We hang around Lukla for a couple of hours as our guide organized the porters who would be carrying our stuff.  That was followed by two hours of easy hiking and what is known as Nepali flat, i.e. lots of up and down, but nothing too strenuous. It was by far the easiest day. We stayed in one of Yomads permanent campsites, which were very clean.

We Hike from Ghat (2530m) to Namche (3440m), ~4-5 hours of hiking but I took 6. At 900m of elevation gain it was one of the steepest days, and crossing the really high suspension bridges is exhilarating – especially if it’s windy.  I felt really good, until about the last 30 minutes.

Rest Day in Namche.  One thing you quickly learn about rest days is that they are not rest days at all.  They’re a chance for your body to adjust to the altitude and follow the advice hike high, sleep low, meaning you hike to a higher elevation, then return to sleep at a lower one.

We did a 2-hour hike up with ~300m of elevation to Hotel Everest View, a lodge where we had some tea and as the name indicates, a view of Everest.  Ironically it’s one of the few places along the trail that you can actually see Everest.

Afterward, we hiked down to a village that is home to the Edmund Hilary School.  I started the feel the elevation here, but as it was a rest day, I hiked slow and was fine.

Travel tip:  I really recommend hiking slow on your rest days.  Save your energy for the days that count. It’s 12 days of hiking, so you really need to pace yourself. There is still a lot of trekking left before we reach Everest Base Camp.

Namche (3440m) to Deboche (3770m), ~ 5-6 hours of hiking, but my actual hiking time was less than 4 hours. And don’t let the elevation fool you, there are lots of up and down, so you’re actually doing about 800m of ascent.  This was one of the most scenic days of the EBC trek.

You have the option of taking the shorter but steeper or longer but more gradual way up a large hill – I did the former and was fine.  You are rewarded with a beautiful monastery, that if you’re lucky you’ll be able to enter.

It has strange opening hours, but I was fortunate enough to be there at the right time.  Some of our group who arrived later were not so lucky. I felt great but noticed that it felt much colder, even though it wasn’t that much higher. 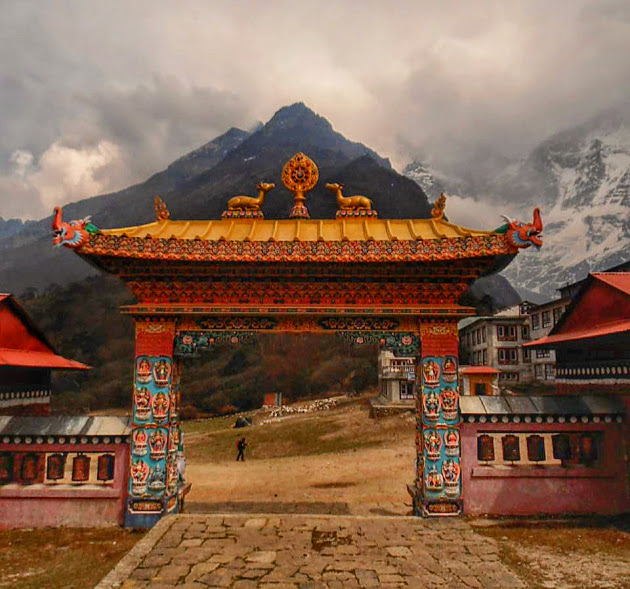 Deboche (3770m) to Dingboche (4360m), ~6-7 hours of hiking.  It was my first night in Dingboche when I was tucked into my tent that I woke up having difficulty breathing.  I panicked for a minute, then slowed my breathing. It was also here that I noticed the landscape started to change.

Trees were replaced with low scrub and a desert feel.   I loved seeing the landscape changes, but trying to hike when you feel you can’t breathe isn’t the easiest thing in the world. I started Diamox (altitude sickness medication) on this day.

Rest Day, which we all know is not a rest day by now, so we did a 400m ascent acclimatization hike. Our guide said it would take 2 hours to get up, but even in my weakened, slowed condition, I made it up in an hour.  It was absolutely gorgeous as it had snowed the night before and we had snow-covered views of the entire valley!

Dingboche (4360m) to Lobuche (4930m), ~ 6 hours of hiking, but I did it in 4 1/2.  A fairly easy day in theory, but I struggled with the altitude sickness, which the pharmacist on our trip, now said was also combined with a lung infection and bronchitis.  The views kept me motivated!

Lobuche (4930) to Gorak Shep (5288) and Everest Base Camp (5360), ~7-8 hours of trekking.  I struggled for the first hour with altitude sickness, but felt better after that, I think the fact that I knew today was the day that we were finally going to Everest Base Camp was excellent motivation!

The anticipation grew as with each step, I got closer and closer.  Yellow specks appeared on the horizon, which our guide said were the climber’s tents.  Upon arriving, the mood was celebratory!

No one broke out the champagne though – drinking alcohol at high altitudes is not recommended, so we celebrated with Pringles bought along the way.  Unbelievably I also witnessed an avalanche right above EBC, but thankfully this was wasn’t deadly as the one in April had been.

Day 9: Trekking Back From Everest Base Camp

Gorak Shep (5288) to Dingboche (4330m), ~ 7-8 hours of trekking.  This was the day we had to decide whether to hike up to Kala Pattar (5548), which offers the best views of Mount Everest.  If you would have asked me before the trip I would have given you an unconditional Hell ya!

What’s s a few more hours on the EBC trek? But given my weakened condition, difficulty in breathing, the 5:00 am wake-up call and extra few hours of hiking it would have added to the day, I surrendered to just descending – as did the rest of our 14 member group.

It seemed like such a shame, but after seeing a lady carried down on a stretcher, and hearing about a helicopter rescue earlier in the day, I think it was a smart decision given my condition.

Dingboche (433m) to Debouche (3550m), ~4-5 hours of trekking, but I did it in 2 1/2.  I was still feeling bad, but descending to the lower altitudes allowed me to quicken my pace.  But the best part of the day?  I had my first shower in five days!!!! Until you’ve gone five days without showering, you can not imagine how good it felt!

Monjo (3440m) to Lukla (2800m), ~4-5 hours of trekking.  I was so lucky with the weather.  It didn’t rain…until today, the last day.  As a result, it felt longer than it really was, but I was thankful that it had held off until the end of the trip.  One of the highlights of today was meeting an adorable cat locked out in the rain and of course, arriving back in Lukla! 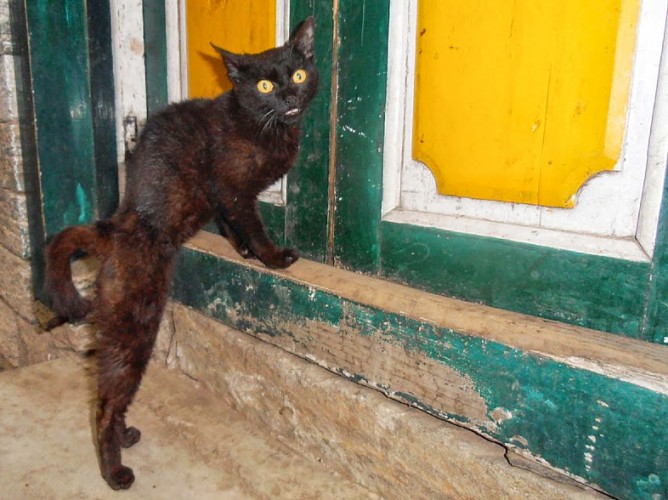 The cat stole more than just my heart but some of the other hikers too. We all considered breaking and entering just to make sure this adorable creature got back into his home and out of the pouring rain. The cat really did make me feel better especially after the last few gruelling days I had experienced on the EBC trek.

A Review of Base Camp Trek With Yomads

I did my Everest base camp trek with Yomads which provides unique travel experiences for the 20s and 30s. Here is why I would recommend Yomads:

Quelling the Anxiety of Group Travel

I was anxious about traveling a group, especially since in recent years I have become more of an introvert. I was worried about how I would handle 16 days with other hikers, plus guides. Fortunately, Yomads keeps the groups small, with a maximum of 16 participants – our group was 9 plus guides, porters and a chef.

A Good Start to the Day

My early days started with a cheerful, Good morning, tea? My assistant guide, Subash would wake me every morning with a steaming cup of tea which is much needed when you have to change into cold hiking clothes. I have a gluten allergy which was catered for by Yomads. My guide Sujan carried with him buckwheat flour which was used to make the most delicious pancakes every morning by the chef. Travel tip:  If you have a food or medical allergy, inform Yomads beforehand and they will do their best to accommodate it.

They Take Care of Their Staff

I have heard horror stories of how the guides are treated on the EBC Trek. Many of them dressed in flimsy t-shirts and flip-flops and not treated fairly. I witnessed this myself during the trek. Yomads and World Expeditions (a travel company that works with Yomads) do not treat their guides this way. The guides receive fair pay and meals during the Everest base camp hike. They also all wore appropriate footwear for the trek. I heard many happy stories from the guides themselves. I guess this is why they were so helpful and friendly.

They Are First Aid Trained

Our guide was first aid trained which is something that was important and appreciated by every member of the group. Almost everyone experiences altitude sickness to some degree during our EBC trek. I personally suffered from altitude sickness, lung infection, and bronchitis. One of the members became so ill that she needed to be carried down a portion of the mountain for several hours. The porters never hesitated to help and this a testament to how caring they are. This is important on a trek like this.

They Are Well Connected

We were lucky to be traveling with Yomads as when we reached Lukla we discovered many hikers that had been waiting days for air transport. Due to the weather conditions, flights are often grounded. We were lucky enough to get a flight out the very same day.

Travel tip:  Many flights between Kathmandu and Lukla are cancelled due to bad weather.  Either purchase travel insurance or book your return flight home back several days after you are supposed to be back in Kathmandu, giving yourself a buffer in case of poor weather.

I had done it!  I had finished the Everest Base Camp trek!