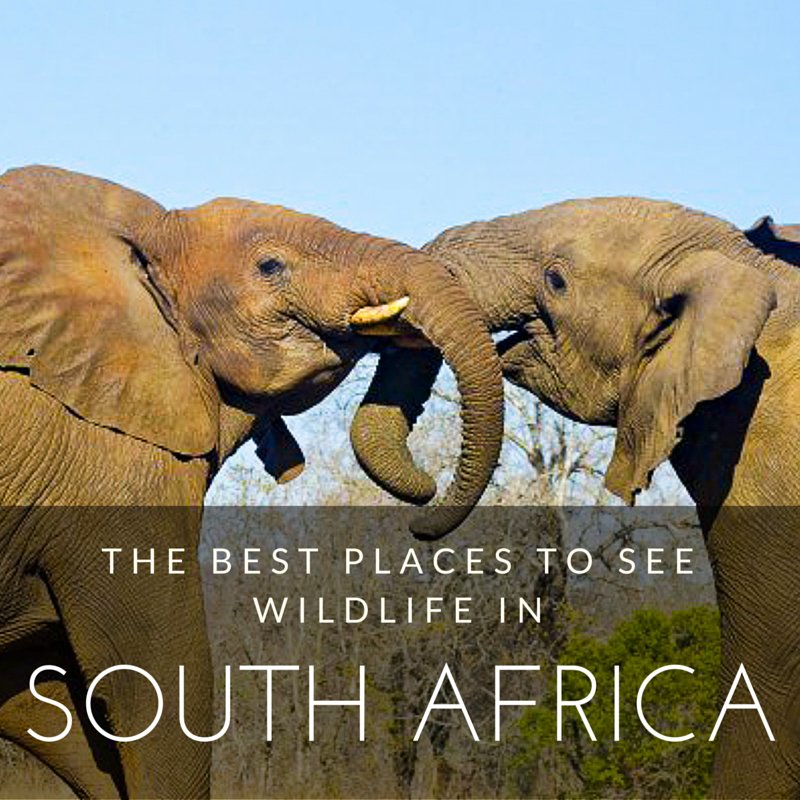 I have been fortunate to visit South Africa more than once and each time I discover something new, so here are the best places to visit in South Africa for wildlife.

Not only do you have a very good chance of spotting all of the Big 5 – elephant, lion, rhino, leopard and buffalo. But you’ll also have the opportunity to observe lesser-known wildlife that is equally fascinating in its own right! You don’t know interesting an endangered Samango monkey is until you’ve seen one! There are hundreds of places in South Africa that where you can spot wildlife. It is a massive country after all. So I have tried to make it a little easier by listing the best places to visit in South Africa for wildlife.

As cliche as it is, the Big 5 were all at the top of my list, and on two visits to South Africa, I’ve seen four of the five. Leopards have continued to elude me until I saw them in Yala National Park in Sri Lanka! 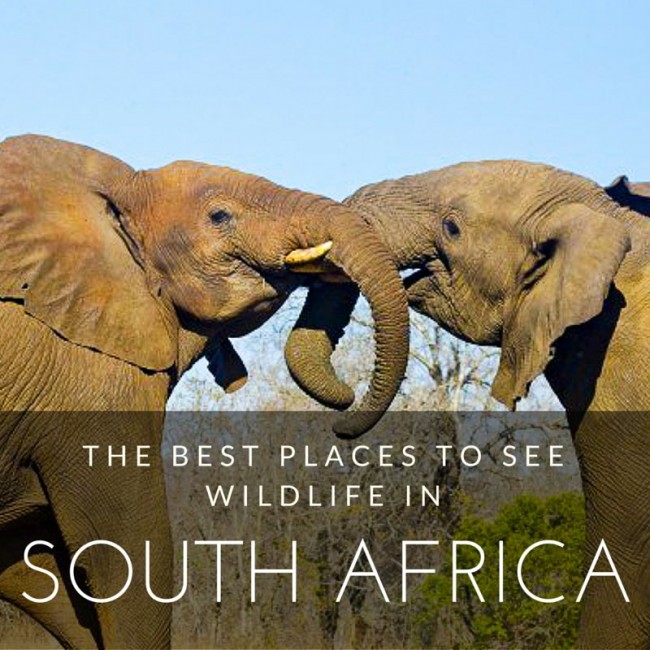 One of the very first places I visited in South Africa, was the Drakensberg, the highest mountains in southern Africa and a UNESCO World Heritage Site. As you’ve probably guessed, I’m a bit of a mountain girl, and the Drakensberg are some of the most spectacular mountains on the planet with their dramatic jagged edge buttresses that meet high altitude grasslands!

The Drakensberg is often overlooked by travellers – perhaps because you won’t see any of the Big 5 here. But it’s one of the best places to visit in all of South Africa! If you love nature and the outdoors, you’ll love the Drakensberg! While you won’t spot any of the Big 5, keep an eye out for the endangered Cape and Bearded vultures. You’re also likely to see baboon troops frolicking in the grasslands, different antelope species and possibly snakes – don’t worry, they don’t want to see you any more than you want to see them.

Recommended Reading: Best Eco Friendly Gifts for Travellers That Give Back

I’ve never been anywhere like the Drakensberg! Besides its outstanding beauty, it’s also home to 665 rock art sites drawn by the San people who inhabited the area for 4000 years! You can hike to some of the rock painting sites where a guide will interpret the paintings for you! 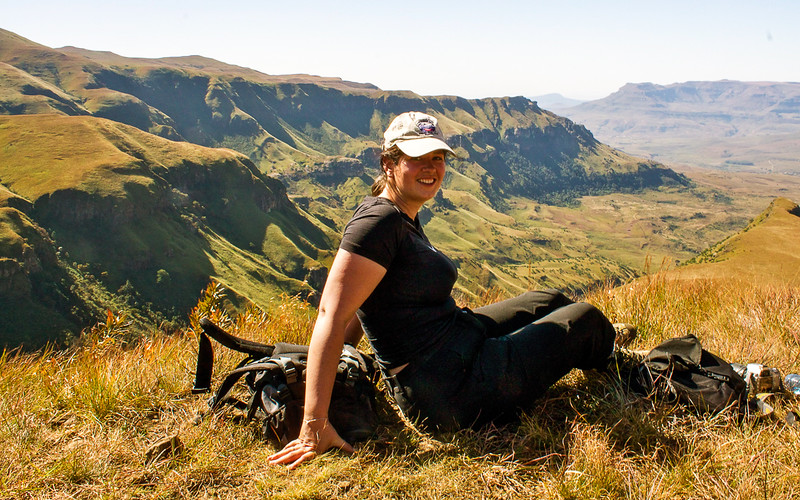 I was there a few years ago and my hiking guide was quite excited that his village was getting electricity in the next few weeks! Yes, it’s that remote, and well worth a visit! 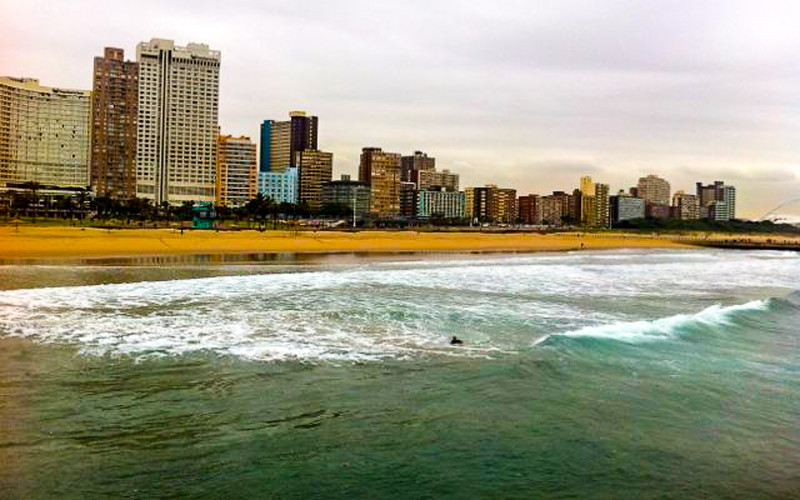 Next, it’s time to hit the beach! Umdloti is located just 26km from Durban and is famous for its incredible beaches! Umdoloti Beach is a fantastic place to watch acrobatic dolphins, or test your balance with surfing! Admittedly, you won’t find much wildlife in Durban itself, but the Golden Mile beachfront (pictured above) is pretty spectacular. I spent several hours watching the surfers against the skyscraper backdrop! Durban is one of the best places to visit in South Africa, especially for the beaches. 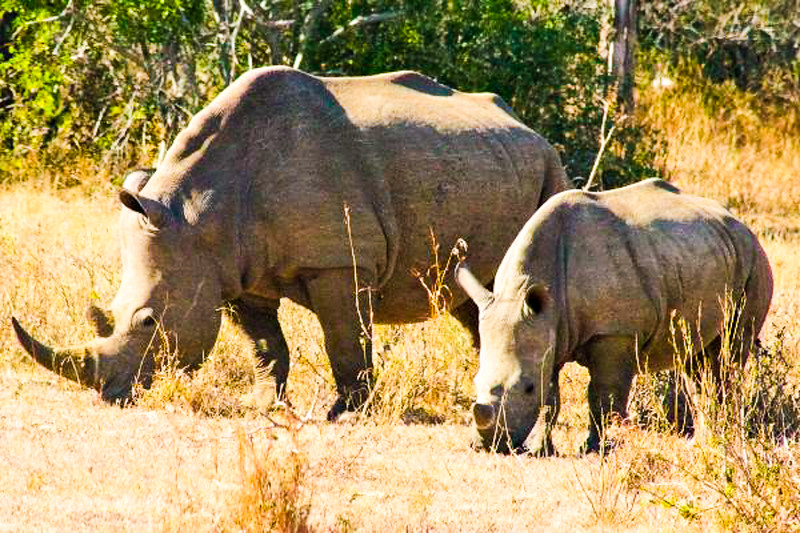 While many travellers flock to Kruger National Park for African wildlife, Hluhluwe-Imfolozi has fewer visitors and offers so much! It’s the only state-run park in Kwazulu-Natal where you’ll find the Big 5!

It’s also the oldest nature reserve in all of Africa, dating back to 1895. Not only that,  but it’s also home to the world’s largest population of white rhinos  ~1000 of them, so you have an excellent chance of seeing one. 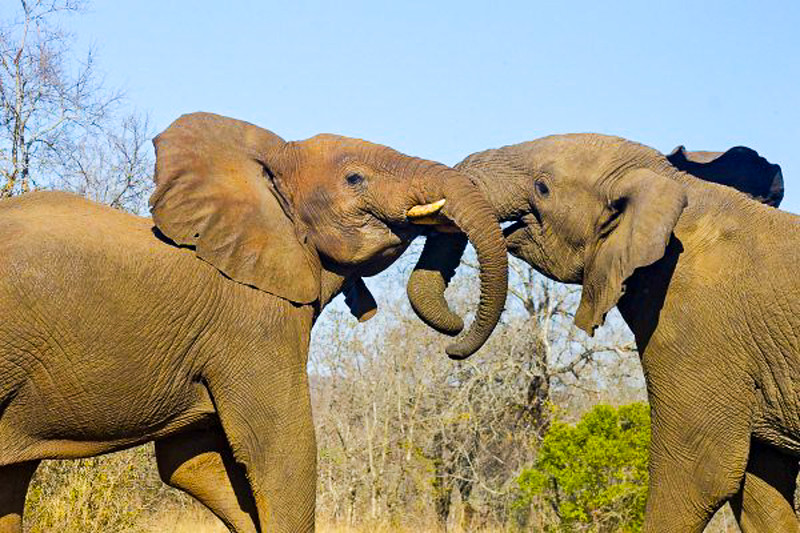 Hluhluwe-Imfolozi is also one of the best places in the world to spot a nyala, a spiral-horned antelope indigenous to southern Africa! As much as many travellers want to see the Big 5, don’t discount other African wildlife. I found hyenas to be particularly fascinating!  Birders can spend days searching for the 340 bird species found in the park.

African safari tip: While you can do a self-drive in Hluhluwe-Imfolozi, I highly recommend going with a guide. The safari jeeps give you a much better view than you’ll have from your car. In addition, the guides see things that you would never notice on your own. They also know a particular animal’s favourite place for a nap or to have breakfast. In addition, they have radios allowing them to alert other guides of significant sightings – that’s how I saw lions in the distance!

iSimangaliso, meaning miracle and wonder, is South Africa’s first UNESCO Site! And deservedly so! Not only is it place of natural beauty, but it’s also home to some of South Africa’s last remaining swamp forests, and the largest estuary in all of Africa!

Birders will have fun spotting the 526 bird species, while beach bums can enjoy the 220km of beach! My favourite part about iSimangaliso though was the wildlife – including several encounters with one of the most dangerous of all African wildlife…. 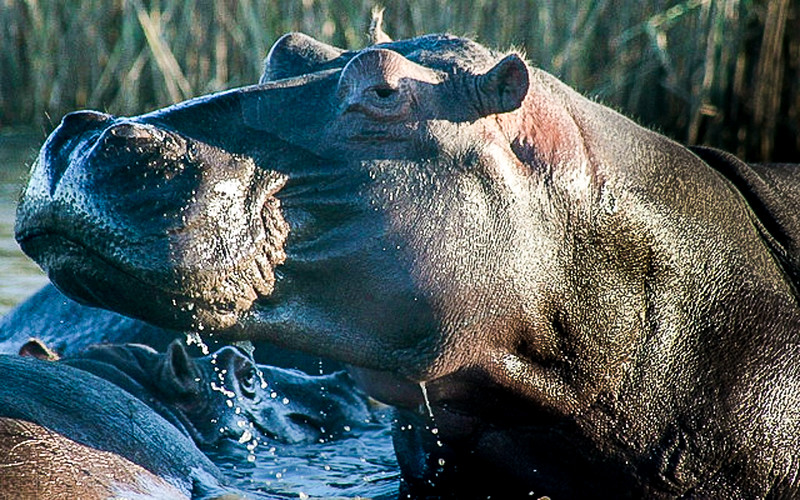 The hippo! Yes, a hippo! Despite being a herbivore, they are extremely territorial and will attack – one good reason that you’ll want to do a guided tour to see the 800 residents that live there….and the 1200 crocodiles! I did a 2 hour Hippo and Croc Cruise and loved getting a closer look at these incredible animals…from the safety of the boat!

My favourite tour though involved monkeys because of course, it would! These aren’t your average monkeys though, Samango monkeys are highly endangered and Cape Vidal in iSimangaliso is one of the best places in the world to spot them…or should I say hear them. You usually hear they’re distinctive shrill long before you see them. If you just happen to look up and see one peering at you through the branches of a tree, be warned, she’s probably after your lunch! Samango monkeys are notorious lunch stealers! Don’t say that you haven’t been warned! 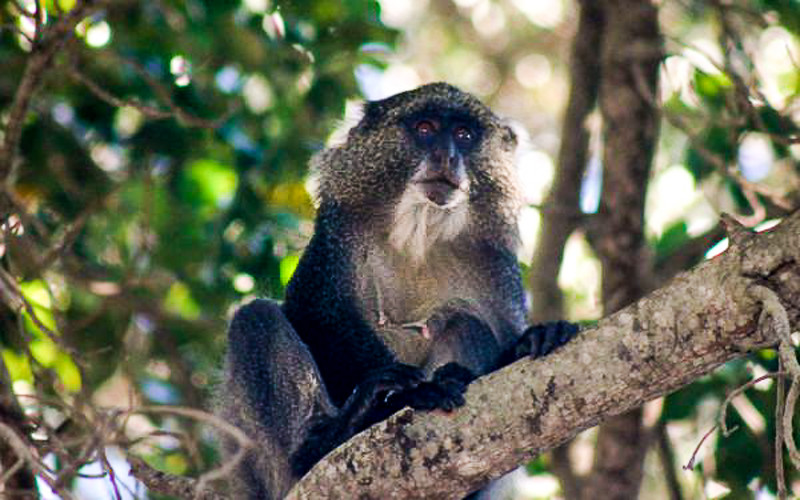 If you’re in iSimangaliso from June to November, you may also be interested in a whale watching tour. They’re virtually guaranteed at this time of year as they are migrating. We got within 10 meters and witnessed multiple breaching! Just take my advice though and take a seasickness tablet if the sea is rough. Despite the captain’s warning, I protested, but I never get seasick. You can guess what happened next. 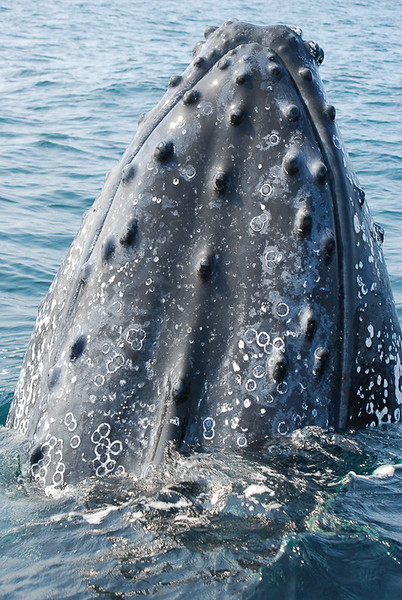 Tembe is my favourite place in all of South Africa! That’s saying a lot since I’ve truly loved the other spots mentioned above! It’s a community-run full-service game park run by the Tembe tribe. I think that’s what makes it so special in part. Locals treasure the history, the animals and the unique ecosystem!

But it’s not just the large elephants that intrigue, sometimes it’s the smallest ones.

I was fortunate enough to see a herd of 60 elephants surround our jeep and with them two baby elephants that were only three days old (pictured below). You can imagine the oohs and ahhs from our safari jeep as we observed these two newborn elephants inspecting each other and their environment with their trunks. Their gait was still clumsy as they traipsed through the tall grass, then hid behind their moms when a juvenile elephant came to close! Moments like these last a lifetime! I will never forget it! 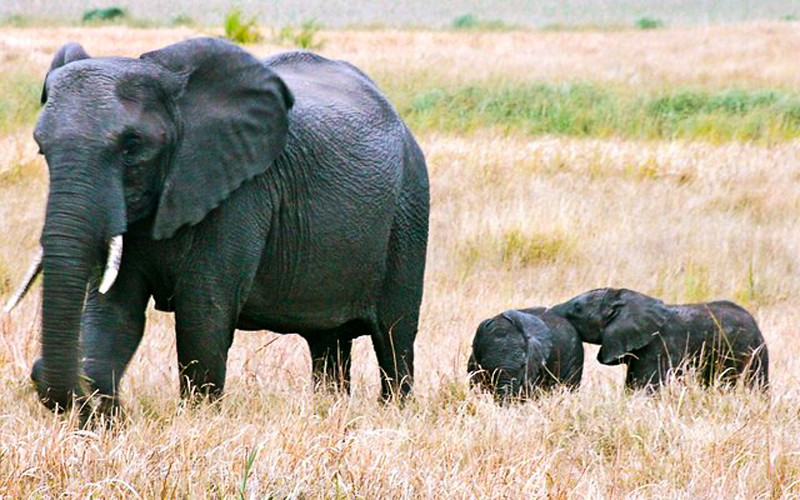 But as incredible as Tembe is for elephants, it’s not all about the elephants! Tembe is also home to the Big 5. One of the places where a leopard teased us with his footprints, only to disappear into the forest again! And if you’re incredibly lucky, you may even see one of the highly endangered wild dogs! They were in another part of the park when I visited, so I missed them. A very solid consolation prize was observing three lions less than 5 meters away!

They were so close that one lady in our safari jeep slid off the seat and hid under it with a blanket covering her. Much to the amusement of the lions! That is until one of the lionesses decided it was time to stop playing around.

She silently got up and headed to the tall grass. I saw nothing, but she silently stood and stared for about 5 minutes. Finally, I saw the slight quiver of the grass, a small antelope. No doubt wondering whether to stay hidden or take his chances and run. I was a nervous wreck! Of course, I wanted to see a lioness hunt, but at the same time, I didn’t. I don’t think that knowing what happens in the Circle of Life would make it any easier to see an antelope being killed. Fortunately, or unfortunately, depending on how you look at it. She decided against the hunt and was consoled by her sister with her big tongue across her face. 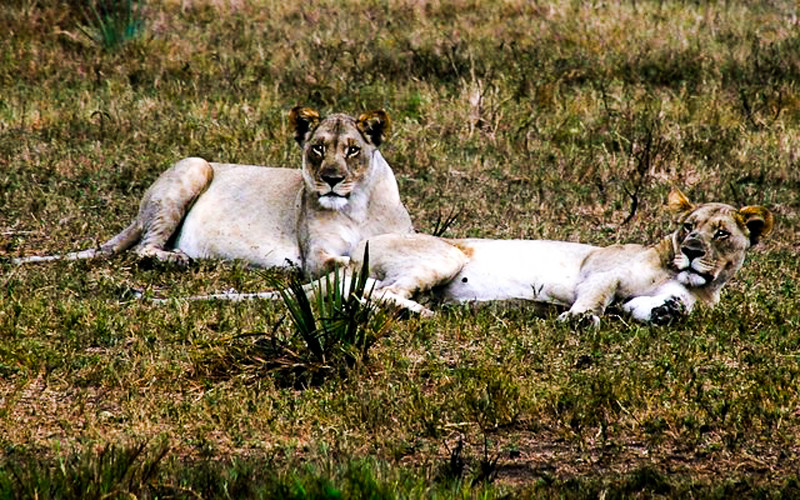 There are 5 of my favourite places in South Africa to spot wildlife! What are yours?

Best Time to Go to South Africa to See Wildlife:

May to September is a great time. The temperatures are mild, and game viewing is at its finest! My first visit to South Africa was to the Drakensberg in May which was great hiking weather. I returned in August for Hluhluwe-Imfolozi Park, St. Lucia/iSimangaliso Wetland Park and Tembe Elephant Park and had incredible wildlife sightings! 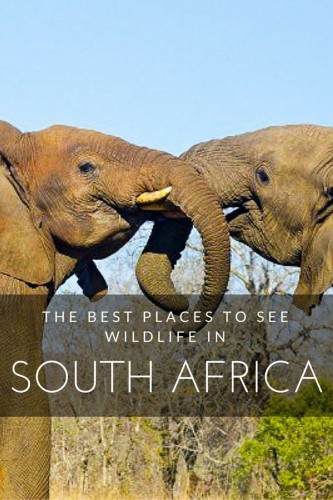 What do you think are the best places in South Africa to spot wildlife?