Like most travellers, I have a mental bucket list that I am constantly updating. As a travel blogger, I have been very fortunate to regularly check off items from that list, including Gorilla trekking in Rwanda.

I had studied Western Lowland  Gorillas during my Bachelor of Science in Primatology.  I went on to work in environmental education at a zoo and designed and taught primate environmental enrichment programs. But still, I had never seen a gorilla in the wild. My dream came true on my ultimate Rwanda adventure. An EPIC trip that will stay forever in my mind.

Bleep, bleep, bleep. That was the alarming sound I woke up to at 5:23 am. Normally I would have turned it off, and then hidden under the covers, but not today.  Today I pulled the covers aside and leaped out of bed, my feet hitting the cold floor of Amahoro Guest House in Musanze, Rwanda.  Today was the day I would be seeing Mountain Gorillas in the wild!

Flash forward 30 minutes later and Omar my friendly guide has picked me up and I’m now in a group with six other gorilla enthusiasts. Our trek to the low stone wall marking Volcanoes National Park has begun.

Our guide repeatedly spoke softly into his 2-way radio, speaking in his native tongue of Kinyarwandan. I didn’t understand him, but I did notice the worried look in his eyes as he exchanged glances with our other guide before brightly announcing that the trackers couldn’t find the gorillas but not to worry.

What? No gorillas?  My pulse quickened. Don’t worry, he assured us, the gorillas are moving fast in search of bamboo shoots.  He repeatedly assured us that the trackers would find the gorillas, but even he sounded less and less convinced as we waited just outside the park border to Volcanoes National Park. I learned quickly that gorilla trekking in Rwanda would require patience.

Half an hour later we were still waiting. Finally, he got the call we had been impatiently waiting for – the trackers had located the gorillas, but we would need to hurry to catch up with them.

But first, he had to warn us of one other thing….bamboo shoots make the gorillas drunk! And there were not one, not two, but three silverbacks, including Guhonda, the largest and oldest silverback in the entire  Volcanoes National Park! We had to be prepared for….drunk gorillas!

It turns out that a drunk gorilla might parade around a bit more, beating their chests, showing off how strong they are, intimidating other males, or (gulp)…us. Doesn’t really sound all that different from drunk men, does it?

We began to hike the steep muddy trail. I was full of adrenalin and could have raced up the hill, but we could only go as fast as the slowest member of the group.  In other words not nearly as fast as I would have liked given the fact that I knew Mountain gorillas were waiting for us.

90 minutes later we reached the trackers. We dropped off our backpacks and took out our cameras as we followed the trackers to the gorillas. I smelled them before I saw them. It wasn’t a bad smell, but a distinctive gorilla smell.

A branch snapped, I looked up and saw the behind of a huge male gorilla – one of the silverbacks who was obviously suffering from stomach problems as evidenced by his backside. Then he was gone, disappearing into the bush, despite his massive size! The adrenaline really kicks in when you go gorilla trekking in Rwanda.

We moved quickly, deeper into the bamboo forest. Then out of nowhere, I saw him… Guhonda, the largest and oldest silverback! I quickly started snapping pictures, but he was moving quicker than we were and just as quickly he was gone too. The next 20 minutes or so consisted of playing hide and seek with the gorillas.  One second you would see them, the next second they had vanished!

Then IT happened. By IT I’m referring to one of the most magical moments of my entire life! A female gorilla (who I later found out is named Kampanga) stopped long enough to look up and acknowledge us before going back to searching for bamboo shoots, but she moved slowly carefully…Perhaps it’s because Kampanga had a baby on her back!  YES, A GORILLA BABY!

And not just any baby, but a baby who seemed to know how cute he was! He played it up for us as we snapped photo after photo. We stared. He stared back with his massive curiosity filled brown eyes. Kampanga decided to move on, coming closer and closer to us.

I was in her way and she gingerly took her hand and brushed my leg, as if to say Excuse me. OMG, I had just been touched by a mountain gorilla! And a very polite one at that! It took every ounce of willpower not to reach out and touch the baby on her back who was literally just inches from me. I was so close that had I extended my arm halfway I would have touched him.

After passing, she let out a low grunt, which I interpreted as Thank you in gorilla language. She proceeded to climb up a tree, her baby’s expression changing from one of curiosity to that of fear, his eyes growing even bigger as his clutch around her fur tightened…Then they were gone.

Words cannot begin to express how I felt….elated….dizzy with excitment…thankful….beyond grateful for the opportunity…Words are simply not enough.  Even now as I write this, several weeks later, my breath has quickened.  It was truly one of the most memorable moments of my entire life! Can I just say this was probably the most exciting moment of my gorilla trekking adventure in Rwanda.

Our time with the gorillas had not yet come to an end yet though.  We moved on and caught a glimpse through the bamboo forest of Big Ben.  Big Ben is famous in his own right, for despite being a juvenile gorilla.  He is bald! The Gorilla Doctors have examined him and he is perfectly healthy…but bald.  Poor guy!  Wonder if that impacts his chances with the ladies?

We passed Karema, another female who is easily identifiable by her missing fingers, caught in a snare.  Snares are not common in Rwanda any more due to some impressive initiatives by the Rwandan government (to be discussed more in an upcoming post), but that wasn’t always the case.

Next, we stumbled upon Guhonda again, the park’s largest silverback. He was settled down, perhaps his bamboo shoot buzz kicking in. PFIFFFFF PFIGGGGHHH. Yes, that is the sound of a silverback having gas! Something that gorillas have a lot of.  Given the fact that Mountain gorillas are predominantly herbivores, this shouldn’t come as a surprise, but still, I found it entertaining.

As an FYI gorilla gas doesn’t stink when you’re standing 3 meters away. All too soon, our hour was up.  It was time to go. To leave the gorillas in peace. To be gorillas again without a group of tourists snapping pictures, oohing and ahhing…. or poking fun at their flatulence. I was the last one to leave and did so only at the urging of our guide. I waved goodbye to Guhonda and mouthed a silent Thank you and until next time…

Know Before You Go Gorilla Trekking in Volcanoes National Park in Rwanda: 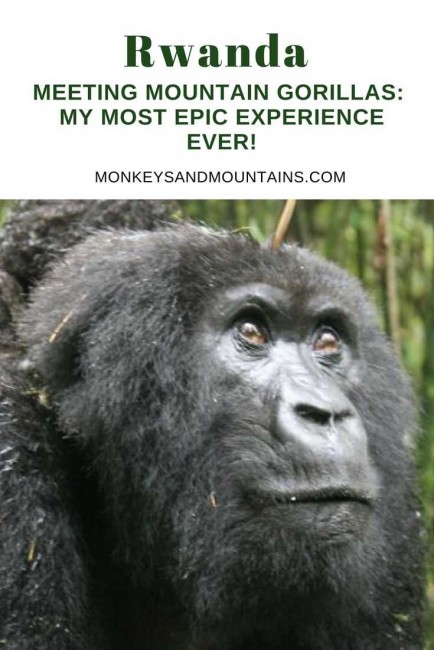