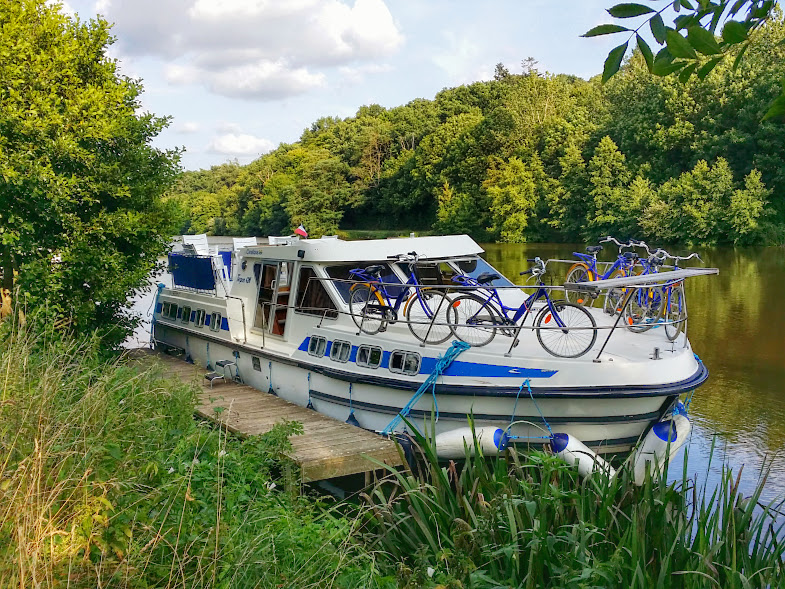 Are you interested in a house boating holiday in France? Look no further than the Mayenne. It’s located in northwest France and is part of the Pays de la Loire region and named after the Mayenne River.

Few things excite me as much as trying something like a canal boating holiday, this time in France. An adventure that I hadn’t tried before and done it in a place that I was previously unaware of! That’s despite having to be in France many times, including three times for the Tour du Mont Blanc.

I’m like a kid in a candy store when it comes to this kind of exploration. It reminds me of just how big the world really is and how there are never-ending possibilities of places to discover.

Our 3 1/2 days house boating holiday started in Daon and ended in Laval. I loved exploring this part of France which isn’t popular with tourists and is the polar opposite of Paris. The close quarters are also a great way to bond with friends or family.

On the downside, I did find myself getting antsy and frequently cycled. I can sit still for a couple of hours but I’m more of an active relaxation kinda gal that a sit and totally chill kind of gal. Regardless, everyone else on my boating holiday really enjoyed it and most of our group returned to do it again the next summer. Interested?

Here are 12 things you need to know about your boating holiday in Mayenne France:

1)No boat license required for houseboats/canal boats in France

One of the things that make the Mayenne particularly attractive for a boating holiday in France is that you don’t need a boat license. You’ll get a short introduction, then a chance to demonstrate your skills. You’re only allowed to drive a  maximum of 10km per hour which is part of the reason that a license isn’t required as it is in other countries like Germany.   Once you’ve shown that you know what you’re doing, you’re off!  The whole process takes a couple of hours.

You need at least one person, more than one is ideal, to operate the houseboat and at least another to help guide the boat through the locks on the canals. On our route, there were 18 each way – if memory serves correctly.

So, when you’re getting your group together for your boating holiday, keep this in mind.  You don’t want to end up with a group where everyone wants to relax on their holiday and no one wants to captain the canal boat. It can be a lot of work for one person, especially if you’re planning on covering relatively long distances each day.

3)You Need a Cook on Your Canal Boat

While it’s possible to grab lunch or dinner at a few places along the way on the Mayenne, it’s likely it won’t always coordinate well with your schedule.  At least it didn’t for us. We ended up eating on the boat more often than I would have liked.

When I’m in France, I want to eat French food – not my cooking! So that means that in addition to at least one captain and helper, you also need at least one person to cook and do the dishes afterward.

On our boating holiday, we were a group of six. Four of us rotated the cooking and cleaning duties, while two others rotated captain duties. This arrangement worked well for us since everyone contributed but we also got to relax which is what you want on your vacation. 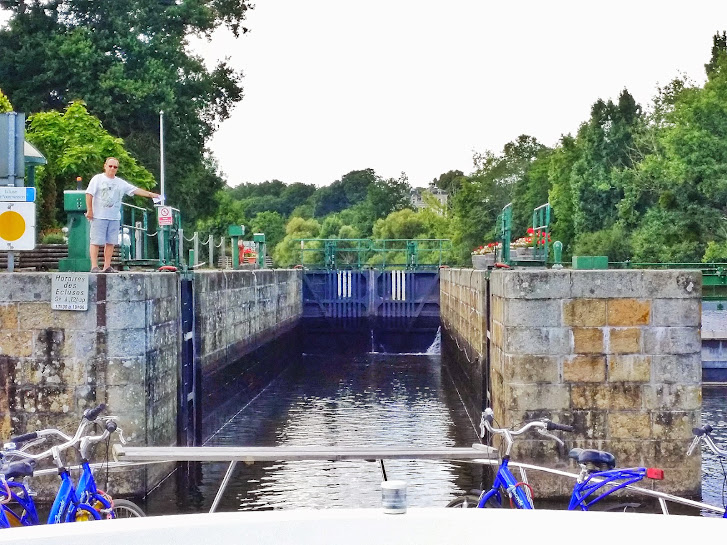 Entering one of the narrow locks with the lock keeper guiding us…in French.

These are in a book on the canal boat, but you really need to know them before you start captaining your boat.  You don’t want to see a sign and be busy looking it up as you hit rock bottom and realize too late that whoops… it meant that you were supposed to avoid going this way due to low water!

If you’re on a tight schedule, try to coordinate your lunch breaks at the same time the canal locks are closed. That will avoid hanging out just waiting for a lock to open.

You really don’t want to run out of water mid-shower or while you’re cooking dinner.  You can fill it at most of the locks. Do it before you really need to, just to be on the safe side.

7) Buy Groceries Before Getting On Your Canal Boat

I really enjoyed eating breakfast on the boat. You’ll want to buy enough groceries for at least a couple of lunches or dinners – see #3 above. This includes toilet paper, garbage bags, dish soap, everything.

None of it was included on our canal boat. I’d also recommended bringing clothespins so that your clothes don’t blow away when drying in the sun.

8)Bring Your Own Power Connectors

There is no way to charge a phone/camera/computer on your canal boat without a USB stick or a charger that you plug into a lighter.  We found this out the hard way and ended up going from store to store for a couple of hours until we found one. So bring your own instead.

9) Plan to Chill on Your Canal Boating Holiday

Yes, you can have a plan, but be flexible.  Ours changed almost every day. We often reached places faster or slower than we had anticipated or came across a place that was really beautiful where we wanted to spend more time. You’re in France. There are lots of incredible places to hang out.

If you’re not captaining the boat or cooking, there is plenty of time to chill so bring a good book.  I can only do so much chilling, so opted to cycle some of the time. Fortunately, we were each offered a bike when we boarded.

There’s a path that runs parallel to the river. Since the boat can only go a maximum of 10km/h, you can cycle slowly and still be faster than the boat.  We arranged to meet at locks, where we could put the bike back on board. I loved the cycling option!

11) Plan a WIFI Detox on Your Canal Holiday

There is no WIFI on the canal boats and there are limited places along the way where you’ll find WIFI, i.e. Laval or Château-Gontier.  With a French SIM card or EU card, I’m assuming you’d have more access. None of our group had this (I had a German card which at the time only worked in Germany) so I can’t verify that. As someone who is almost always connected, I really enjoyed the detox.

12) Make Time for Sightseeing Along the Way

As relaxing as it is being on the boat, it’s also nice to get off the boat. Laval and Château-Gontier are the two largest cities along the way.

I loved Laval and really enjoyed the Refuge de L’Arche, an animal rescue centre in Château-Gontier. Full disclosure:  They also had rescued monkeys, which may have contributed to how much I liked it!

Plan to spend a morning or afternoon in each if time allows.  There are also smaller interesting places of interest along the way, but you have to know where these are in advance, as there are no signs along the river.

We realized too late that there was an interesting monastery that we had missed. I wish I would have done more research prior to boarding the houseboat so that I could have visited the smaller lesser-known sights along the way.

13) It Helps To Speak French

We were fortunate to have Elena from Creativelena.com on board who is fluent in French. This was very useful when we were approaching locks and the lock keeper was shouting instructions.  If you don’t speak French, it’s worth taking the time to learn a few basic words – i.e. backward, forward, left and right for starters.

Storage space is really limited so pack light.  Backpacks that fold up are easier to store than hard-covered suitcases.

Our houseboat could have slept 9, but we had 6 on it which we all felt was perfect.  Any more and it would have been crowded.  There’s not a lot of breathing room on boats to begin with, so leave a little extra space to make your trip more comfortable.

16) Don’t Forget the Wine on your Boating Holiday

Houseboating is a true slow travel option.  You really get time to soak up the landscape when you’re traveling at 10km/hour and stopping at all the locks.  And the sunsets. I’ll never forget the sunsets! And let’s face it, doesn’t wine make everything better?

If you need to destress and enjoy slow travel away from the tourists, you’ll enjoy a boating holiday in France along the Mayenne River. 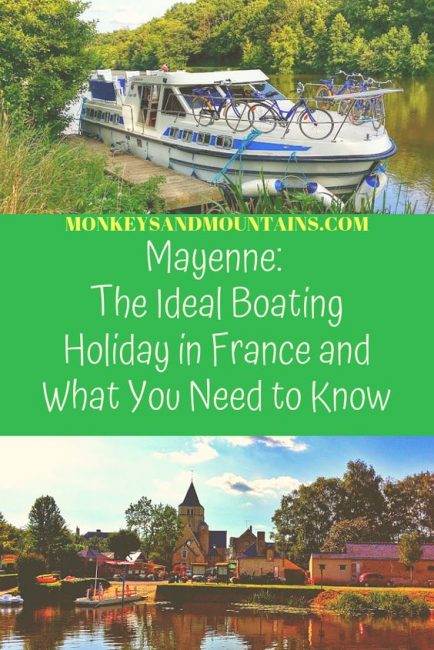 Note: My trip was made possible by Les Canalous, who provided the houseboat. As always, all opinions expressed are my own.

5 thoughts on “Mayenne: The Ideal Boating Holiday in France and What You Need to Know”