Okinawa may not be at the top of your list when you think of bucket list diving destinations, but it should be.

Okinawa and specifically the Kerama Islands group is a national park. It’s revered by Japanese divers as a hot spot but largely ignored by the rest of the world.  Admittedly by myself as well until I started doing research for an upcoming trip.

I’ve done over 120 dives and some AMAZING ones at that. My first big diving trip was diving with large schools of hammerhead sharks in the Coco Islands off of Costa Rica.

I’ve also dove with hundreds of hammerheads in the Galapagos, dove with Oceanic white tips in South Africa, explored the coral reefs of the Red Sea in Egypt, Belize and Honduras, and the Coral Triangle in Palau, the world’s first shark sanctuary.

Besides being fascinated by what lies beneath the surface, I believe that divers can play a major role in conservation. Particularly when it comes to saving sharks.

So while I only did one dive in Okinawa, I can honestly say it was the best first dive I’ve ever done.

Normally, the first dive is not that exciting. It’s a safe place for the Dive Master to check out your diving skills. Then when you’ve got the dive master’s approval, you head to the better dive sites. They’re usually more challenging regarding depth, current or a combination of the two. 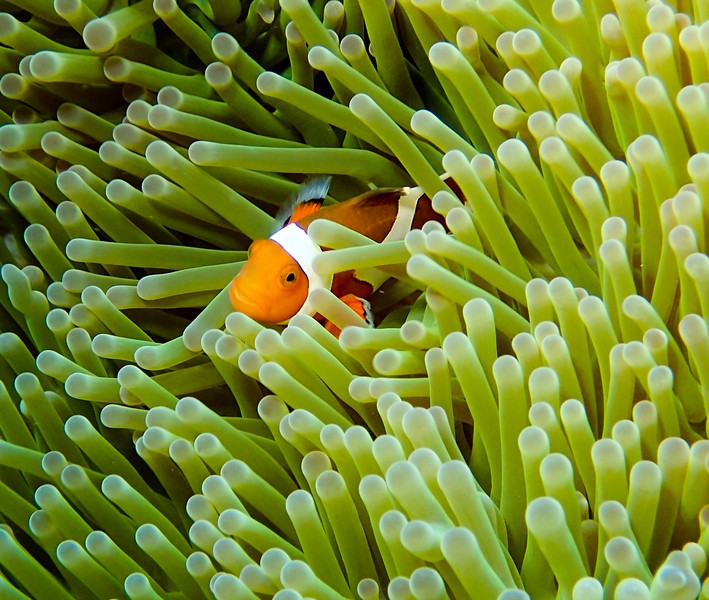 My first dive in Okinawa was just a 5-minute boat ride from Zamami Island to  Botsu-Butsu Coral in Gahi Island. I saw a sea turtle, several anemonefishes, aka clownfish, colourful nudibranchs, a cuttlefish, Gobies and several sea snakes, which was also a first for me.

And get this, we were only underwater for 36 minutes and only at a maximum depth of 19.1 m.

Had I not been so cold near the end of the dive, I would have wholeheartedly done another one. The water temperature was 22°C. While I was okay for most of the dive, I knew that the second dive is always colder.

It was a tough call to make but one that the Divemaster welcomed. He was also too cold for another dive.

While I was very impressed by my dive, Divemaster Yoichi assured me that it wasn’t even close to the best dive site found in Okinawa.

Each of the islands is surrounded by coral reefs with upwards of 200 species. The Kuroshio Current enriching them with nutrients.

What Else Does Diving in Okinawa Offer?

The subtropical climate makes the perfect breeding ground for humpback whales from January to March each year. It’s possible to hear them singing underwater.

While I was within ear reach and there at the right time of year, their singing alluded me. Fortunately, I spotted a mother whale and her calf from a boat the next day. Still, I’m adding hearing a whale sing while underwater to my bucket list.

Off of Ishigaki Island, divers can observe huge manta rays. Perhaps the island that intrigues me the most is Yonaguni. It’s Japan’s most remote island. And has the privilege of being home to schools of hammerhead sharks, sometimes numbering up to 100.

Also, Yonaguni has a mysterious gigantic ruin. Whether it’s real and one of the oldest artifacts on earth or is man-made is hotly debated.

Divers can have encounters with whale sharks, the largest fish in the ocean at Yomitan Fishing Port. These gentle giants range from four to seven metres long.

Don’t let their size fool you; they eat plankton, not people. I’ve been fortunate enough to dive with whale sharks on several occasions, and it’s one of the top adventures I’ve ever had in my life!

Finally, the Battle of Okinawa in 1945 resulted in ~1300 wrecks. While many Westerners seek out wrecks when diving, many Japanese will avoid them.

Sometimes due to spirituality and sometimes because of the sadness. That’s especially true if you lost a loved one in WWII.  If you’re interested in wreck diving keep this mind. Be respectful when enquiring.

Okinawa is a fascinating place to visit in its own right – check out these above the water photos of Okinawa that will make you want to visit.

When Is the Best Time to Dive in Okinawa?

Spring up until June is great. If you don’t mind the cold, then late fall and winter offer great visibility, upwards of 30 metres (1oo feet). I dove in February, and while visibility was fantastic,  I found it a bit chilly at 22C, but it was also colder than usual.

The temperature rarely dips below 15C in the Kerama Island and it was a couple of degrees colder than that.

From June to November, it’s typhoon season. Most of the typhoons IF they occur, and they don’t occur every year, happen in  July, August or September. Source: https://www.okinawa-information.com/weather-forecast-typhoon-rain.

Still, that doesn’t stop many tourists from visiting in July and August which is the busy season. If you do decide to travel during typhoon season, ensure that you have travel insurance, which you should have anyway. Typhoons have a way of interrupting travel plans unexpectedly.

You can find some great shore dives from Naha, the capital city on the main island. I dove off of Zamami and loved it. From my research, Yonaguni with its schools of hammerhead sharks and mysterious artifact is at the top of my list for my return trip.

This article by SportDiver has further recommendations. Okinawa offers something for almost every type of diver, it’s a matter of what you’re seeking from your dive.

Which Company to Dive With?

I dove with Dive-Inn-Hama on Zamami Island which is the closest dive shop to the water. Many dive shops only speak Japanese since the overwhelming majority of divers to the Kerama Islands are Japanese. This dive company speaks English, Portuguese, Spanish and Japanese so they may be worth looking into.

With the exception of the main island of Okinawa and in Naha,  accommodations are generally small hotels and guest houses that are simple yet clean. Many dive shops also have a guest house. You can see a list of accommodations here.

In Naha, I stayed at the centrally and conveniently located Hotel Rocore Naha. While I normally don’t like large hotels, I enjoyed my stay here and the breakfast buffet had a great selection of dishes.

While I only did one dive in Okinawa, it was a spectacular one. Knowing that it wasn’t even close to the best one in the Kerama Islands has me shaking in my diving boots with excitement about what the next dive will hold. I will be back.

Disclosure: Thank you to Visit Okinawa for making my dive trip possible. As always, all opinions expressed are my own.

10 thoughts on “Why Diving in Okinawa, Japan Should Be On Your Bucket List”