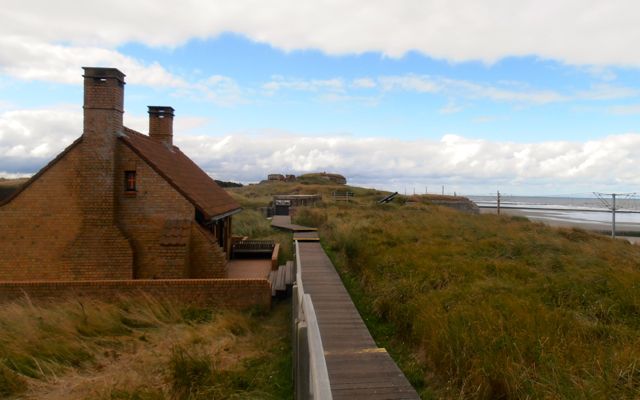 So no one was more surprised than me when I actually really enjoyed my visit to the Atlantic Wall Museum in Ostend, Belgium!

The Atlantic Wall Museum is ranked the #1 attraction of Things to Do in Ostend on TripAdvisor.com.  Prior to my visit, I found it odd that a military museum had this honor. Especially when Ostend has such incredible beaches!  But after my visit to the open-air museum, I understood why.

What Is The Atlantic Wall Museum?

Backing up a little for those unfamiliar with its history as I was, the Atlantic Wall was a fortification built by the Germans.  It was used in both WWI and WWII.  Unsurprisingly the best-preserved parts of the fortification are those from WWII.  It was built to stop the attack from the allies.  But in reality, it saw little action as the Allies attacked in Normandy. It was strategically located, meeting the shoreline of the North Sea and stretches all the way to the spanish-french border.

The Atlantic Wall Museum is located in the Roversjide Domain which houses 3 museums in total. One of those museums is a memorial to Prince Charles, who incidentally also declared that the Atlantic Wall should be preserved for future generations.

Why I Enjoyed This Museum

I think the reason that I enjoyed my visit so much is that visitors get to retrace the literal steps of German soldiers. The two-hour self-guided audio tour takes visitors through over 2km of trenches, 60 bunkers, observation points, and gun sites. You are literally where the soldiers were.

Even without a military background, I immediately recognized how strategically the fortification was set up.

Glimpsing inside the bunkers, I quickly realized that I wouldn’t want to spend a couple of days there, much less long. Most of the daily activities (minus being on the lookout) occurred underground. These bunkers were windowless and largely lightless conditions.  The bunkers are outfitted in a way that shows you what life was like at the fortification. The bomb shelters were even grimmer – although admittedly better than the alternative.

These obstacles were placed near the shoreline, but hidden underwater in high tide, when the enemy was most likely to attack. They prevent the enemy ships from getting close to shore.  With a little bit of luck, might even damage the ship.

Walking through the 2km of trenches makes it easier to visualize how life must have been like for the soldiers stationed there.

Despite my lack of interest in military history, I really enjoyed my visit to the Atlantic Wall Museum. Being able to actually tour the fortification, really brought the history to life. It is much more interesting than just looking at photos or old weapons in a traditional museum.  I would highly recommend a visit.

The Upstairs Hotel is fun and vibey and comes complete with a slide in the foyer. It is a beachfront property and offers live entertainment in the evenings. It is a great place to stay if you are visiting Ostende with its comfortable rooms and bar and lounge where you can relax and rest after exploring the Atlantic Wall Museum.

C-Hotels Andromeda has a great rating and is a beachfront property. Enjoy some of the best views from your room’s private terrace. And make sure to take a dip in the pool and check out the onsite spa. If your visiting during the warmer months make sure to spend some time on the terrace. It’s a great place to relax.

4 thoughts on “Atlantic Wall Museum: The #1 Attraction to See in Ostend”