Tembe Elephant Park is one of the top travel adventures I have ever done! It is home to South Africa’s largest elephants, the tuskers.

Considering the amazing places I have been – this speaks volumes for Tembe Elephant Park. I mean it beat out all my other adventures including diving with sharks – without a cage! That is some pretty stiff competition.

Tembe Elephant: Home to The Largest Elephants in Africa

In the early 1900s, the great tuskers were commonly found throughout the African continent, but now less than 40 remain in all of Africa because they’ve been hunted for their huge ivory tusks. Tembe is home to some of them, including Isilo, the largest elephant tusker in southern Africa!

But there’s more to Tembe than elephants!

(Don’t worry, we’ll get back to the elephants). Tembe is home to the Big 5 and the highly endangered wild dogs (which I didn’t see since they were hanging out in the opposite end of the 300 square meter park).  What I did see though were three lions. 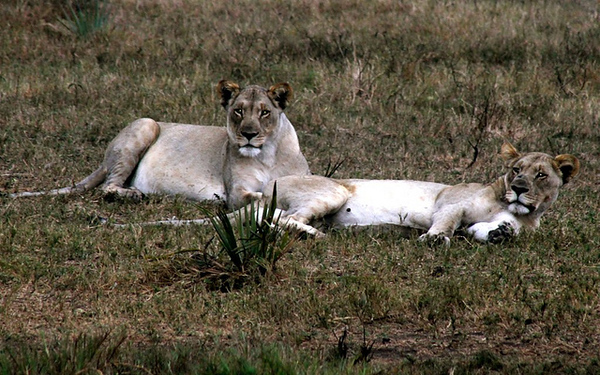 The male was off on his own a bit, while the two lionesses appeared bored and uninterested as our safari jeep pulled up.  It’s incredible how interesting lions can be, even when they’re doing absolutely nothing!   Fortunately, one of the lionesses decided that we deserved a little action and starting cleaning the other lioness: 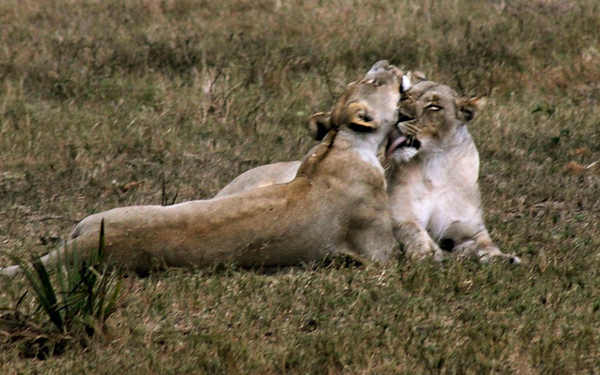 Apparently this worked up her attitude as she got up and started to stalk…nothing.  At least that’s what I thought at first.  Then I slowly saw it, an antelope almost totally camouflaged in the tall grass.

I couldn’t decide whether I wanted her hunt to succeed or not.  Unfortunately for her, she didn’t.  She then made her way back and moved onto a much easier target – the three safari jeeps full of slow-moving un-camouflaged tourists.

She stared us down and parked herself less than 5 meters away – never taking her eyes off of us.

One lady in the jeep behind us was so scared that she hid under her jacket on the floor.  I was in complete and total awe.  There was nothing from stopping the lioness from attacking our safari jeep, yet she didn’t.

Having said that, there’s no way I would have been getting out of the jeep to take a bathroom break! 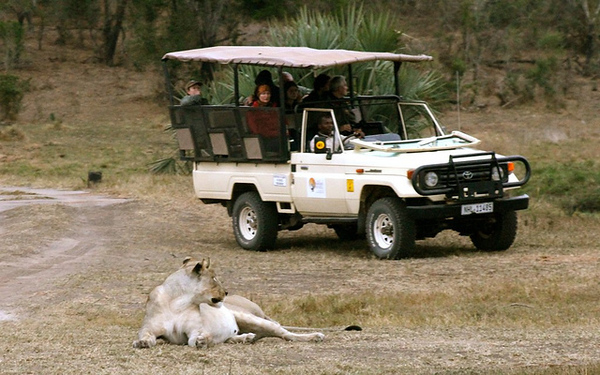 Sometime later, our jeep moved on, our guide whispering something into his radio to another guide.  They had spotted something else and were moving up.  I was annoyed and wanted to stay with the lions.

What could be more incredible than observing lions, seeing a lioness hunt and being stalked by a lioness?

Getting Up Close & Personal With Tembes Elephant Herds 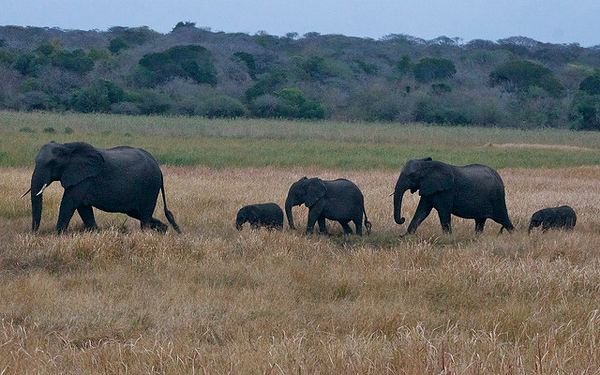 I lost track of how many there were, but there were over easily over 20.  As luck would have it I got to see the large herd crossing the road as they moved into the forest for the night.  Incredible!

And then something even more incredible happened!   I got within 10 meters of not one, but two baby elephants   And get this:  they were only three days old!

Yes, I was THIS CLOSE to two-three day old baby elephants…in the wild!:

All This in 3 Hours

Anyone who has ever done a safari knows that there can be periods of long waiting, often hours of just seeing the odd antelope. Our luck in Tembe was incredible! 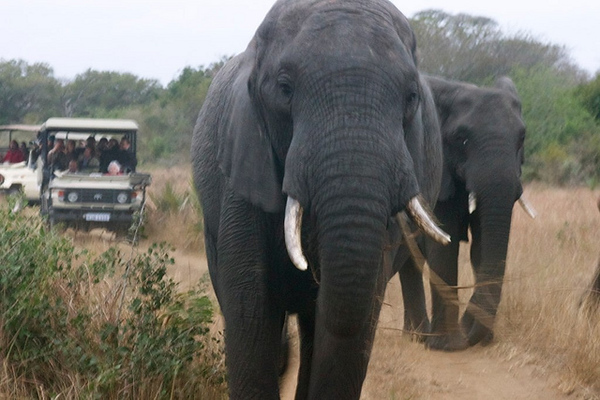 Visitors to Tembe Elephant Park can sign up for two jeep safari drives daily. Animal enthusiasts craving more can make their way down to the watering hole and a hide where visitors can spend the entire day observing everyone who comes to the watering hole including bird, antelopes…and of course some of Tembe’s 200+elephants!

Be sure to check out the 24-hour webcam of the watering hole in Tembe Elephant Park.  After viewing it for less than 30 seconds I started planning my trip to Tembe!

Despite seeing elephants in Hluhluwe-Umfolozi Game Park in South Africa and lions in Hlane Royal Park in Swaziland, I left Tembe in complete amazement.

My only regret is that we stayed for just one night.  That was waaaay to short!  Fortunately, I can (almost) transport myself back to Tembe via the webcam.

As I write this I’m listening to hundreds of birds chirping at the Tembe watering hole.  I keep getting distracted though as I keep toggling back and forth in hopes of seeing my good friend Isilo…or a leopard!

There are several options for accommodation in the park. You can stay at the Tembe Elephant Park Lodge which is a 3-Star lodge that is a tented camp for a real African experience. Enjoy breakfast every morning while taking in the smells and sounds of the South African wilderness.

Another option is the Royal Thonga Safari Lodge which is a 4-Star. If you prefer a touch of luxury while exploring then this is a perfect choice. The rooms are equipped with mosquito nets (which you need in summer) and each have an indoor and outdoor shower. The lodge also offers tours into Tembe Elephant Park and to other areas in the vicinity.