Shark diving in South Africa without a cage is an adventure that will definitely get your heart pumping.

Especially when you first jump in – and don’t know what you’re jumping into. It’s definitely not for the faint of heart.

However, shark diving offers an incredible chance to first hand observe one of the most misunderstood creatures on the planet.  I guarantee it will change your perspective.

But it was my first time diving with Oceanic Black Tip Sharks and Ragged Tooth Sharks, affectionately called Raggies.

Note: this article is about diving with sharks WITHOUT a cage. You don’t need experience if you want to dive with great whites sharks WITH a cage. Check out cage diving tours here.

Related Reading: How Swimming (And Diving) with Sharks Can Save Them.

Protea Banks is known for its large quantities of sharks. The tough part is getting across the rough break.  You hold on to the ropes that line the dinghy and hope for the best. Prepare for lots of bouncing and brace yourself as you bottom hits down. I thought it was kind of fun, but not everyone shared my sentiments.

The First Dive at Protea Banks

Once the break was cleared, the rest of the ride was smooth. We arrive at the pre-appointed spot by the dive team, who pours chum into the water – a mixture of blood and fish heads.  Next,…we wait…There’s no point getting into the water and wasting valuable oxygen until the sharks have appeared.

Fortunately, the sharks show up in a matter of minutes. We scramble to assemble our dive gear.

I’m always nervous when I begin a shark dive, especially at a new location.  You never know who will be waiting for you below the surface…and how many of them.

But once I’m in the water, my fear quickly dissipates. Its replaced by awe and gratitude.  I feel like the luckiest girl in the world to have the opportunity to observe sharks in their natural habitat.

In this case, it was seven Oceanic Black Tip Sharks. They run an average of 1.5 m (5 ft) but can get as big as 2.7m (9 ft). They definitely seem big to me, especially when there’s seven of them circling the bait bucket surrounded by small fish.

My theory is that the sharks are just as curious about me as I am about them.  They feign disinterest as they glide past me, but they don’t fool me.  They didn’t get to be the top predator of the ocean without paying attention to the slightest detail. That includes my heartbeat.

Instead of scaring me, I am fascinated that they can sense how fast my heart is beating.  I practice slow controlled yoga breathing. In part because I am relaxed. And also because I want to prolong the dive as long as possible.  More oxygen = more time with the sharks.

My Second Dive at Protea Banks

This was an epic dive – 17 Ocean Black Tip Sharks! Roland, one of the owners of African Dive Adventures was our skipper for this dive. He sat this one out and is now regretting it. He has been diving these waters for 16 years and only rarely has seen so many Oceanic Black Tips on a single dive.

Are You Likely to See a Great White Shark at Protea Banks?

I ask Roland the obvious question Have you seen any Great Whites?  He replies, Only twice in about 500 dives. I can’t decide whether I’m disappointed or relieved – remember there’s no cage. And you can’t control which sharks are going to show up.

On the way back to shore after diving at Protea Banks, I’m exhilarated and taunted by Roland’s final words to me;

If you think the Oceanic Black Tips are big you should come back for the Tigers, they make them seem like guppies!

After a couple of great dives at Protea Banks, we’re off to Aliwal Shoal, just further up the coast where we dove with Agulhaus House & Diving.

Aliwal Shoal is ranked as one of the top 10 dive sites in the world. It’s known for its reefs…and its sharks. It’s Raggie season, so we’re hoping to see a cave full of Raggies.

We see two.  I’m delighted.  They’re aptly named after their ragged teeth and look rather intimidating. Fortunately, their appearance is deceiving. They’re rather docile – as far as sharks go.

Next up are the baited dives.  We see more Oceanic Black Tips with an impressive 12 sharks make an appearance – on a single dive!

On our last dive, our dive master’s blue eyes grow big through his mask.   That is either a really good or a very bad sign.  He points frantically below us.  I see a shadow.   It disappears.   Then reappears. Then disappears.

The next time it reappears, I make out the rounded nose – a characteristic of a Bull Shark, or Zambezi Shark as they’re known locally.

National Geographic reports that they are the most dangerous shark in the world.   Even more dangerous than Great Whites or Tigers, who are also considered dangerous.  They are known to be aggressive.

It’s not my first time diving with Bull sharks, I dove with two of them in Costa Rica, and they fascinate me to no end.

But the Bull shark has a secret.  This shark, supposedly the most dangerous shark in the world, is shy.  Painfully shy.

Think of the star football player cleaning it up on the field, then awkwardly hanging out by himself at the afterparty. That’s what a bull shark is like.
It forgoes the fish in favour of being cautious. It keeps a distance of at least 5 meters between the divers and him.  Remarkably another Bull shark joins him.  This shark is also just as shy.  I want him to come closer to tell him that I don’t bite.

I’ll leave it your imagination to insert the obvious joke here.   Neither of them does. They slowly swim deeper into the shadows. Soon,  I can’t even make out a faint outline.  They are gone. Neither of them to be seen again. I’m disappointed but incredibly grateful that they graced us with their presence on and off for 20 minutes.

Other divers are running out of oxygen and are surfacing, heading back to the boat.  I notice the shark’s interests shift from the bait to the divers. From underwater, it’s quite a sight – divers thrashing around on the surface, as they take off their weight belts and fins. I can see why the sharks are curious.

I’m completely enthralled.  Before I know it, it’s only me and the divemaster in the water.  The shark’s interest returns to the bait.  They come closer to us, now that there are only two of us in the water.  Perhaps they are feeling braver now that they outnumber us.  I am overjoyed.

The five minutes I spend alone in the water with 12 Oceanic Black Tip sharks (and the divemaster) quickly becomes one of my all-time diving highlights.

I slowly ascend, noticing the sharks ascending with me.  As I unclench my weight belt, I hit something which I presume is a shark. They’re that close.  Now I’m nervous.  I feel perfectly safe diving with sharks, but get uncomfortable being at the surface where I can’t see them. I’m lifted onto the boat, too tired to jump unassisted.

Know Before You Go Shark Diving in South Africa:

Where to Stay When Shark Diving at Protea Banks

I recommend staying in Margate.

Where to Stay When Diving at Aliwal Shoal

I recommend staying in Umkomaas.

When shark diving in South Africa you’ll need to go back at different times of the year to see all the shark species, but no matter when you go, you’ll come back with a newfound respect for these incredible creatures.

View Shark Diving in South Africa in a larger map 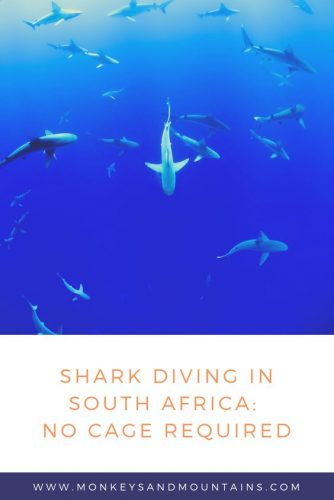 Note: Thank you to Roland from African Dive Adventures and Mickey from Agulhaus House and Diving for their hospitality.