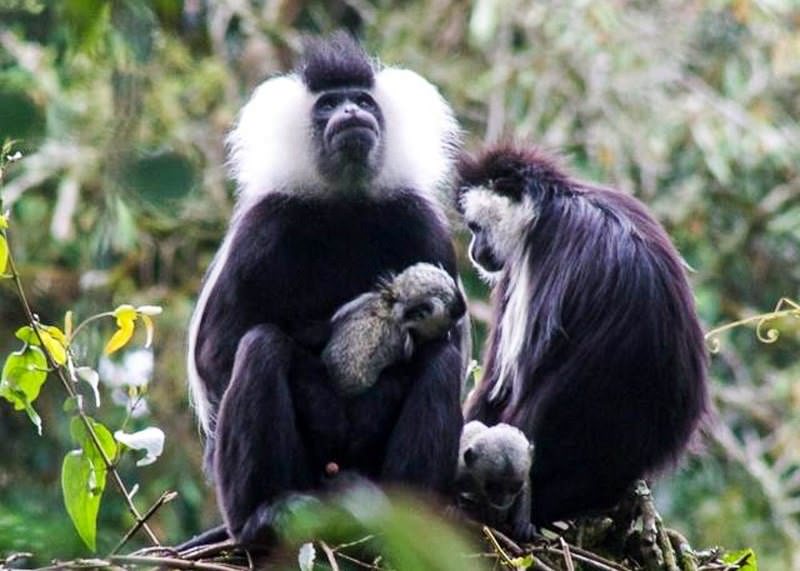 Nyungwe Forest in Rwanda is home to 25% of all the primates in Africa, 275 species of birds and E. Africa’s only canopy walk. It’s a hidden gem.

Be honest, have you ever heard of Nyungwe Forest in Rwanda?

I hadn’t, which in retrospect is rather surprising given it’s the largest high altitude montane forest in East and Central Africa.  Even more impressive to me, it’s also home to an incredible 13 species of primate – 25% of primate species found in all of Africa! So it was rather surprising that I had never heard of Nyungwe Forest.

What Animals Are There in Nyungwe Forest?

Four species of primates are habituated (used to people). As a result, the park offers guided tours to see chimpanzees, black and white colobus monkeys, Blue monkeys and Mangabeys.  During my Rwanda adventure trip, I did guide tours to see the chimps and the colobus monkeys and loved every single minute of both tours – so much so that I’ll be writing in more detail about them in a later post – with some photos of the cutest baby monkey I have ever seen!

Nyungwe Forest is not just for primate lovers though.  It’s also an exceptional place for bird watching.  It’s home to 275 species of birds and 25 endemic birds, including the Turaco.  You will hear its loud call before you see it, making it relatively easy to seek out. It’s a crested bird, who when it spreads its wings reveals beautifully colored red feathers!

I would also recommend one of the guided hikes offered.  No solo hiking is allowed in the park, and there are scheduled hikes (check with the park office), or book your own in advance.

I was rather excited when David my guide asked if I wanted to take a small detour to see the source of the Congo River while on one of the guided hikes.  Of course, I did.  But somehow it looked rather different from I had anticipated:

There’s also a three-day hike which is the furthest source of the Nile.  After seeing my disappointment over the wee source of the Congo River, David warned me that while the hike is beautiful, the Nile source was even smaller than the Congo source.  Still, I would love to come back and spend more time in the forest.  There’s nothing like hearing pant hoots from wild chimps or with a little bit of luck come across a monkey or two!

Nyungwe is also home to East Africa’s only canopy walk.  If you’re afraid of heights forget it.  David said that about half of visitors take the detour after taking one look at the bridge which towers over a valley in the rainforest.  This includes the Prime Minister of Rwanda! Of course being a politician, I’m sure he had a good excuse. 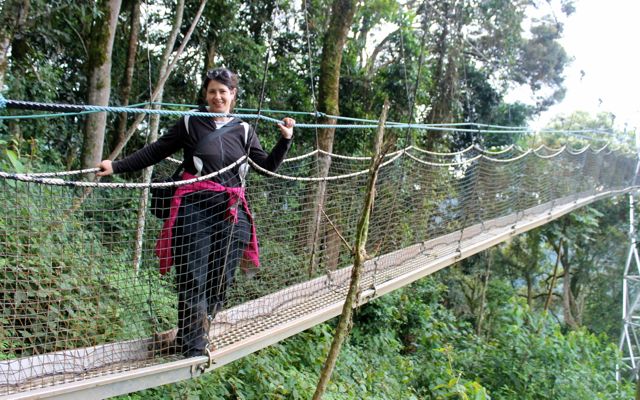 I spent two days in Nyungwe but I wish I could have spent three more.  I would have loved to have done the Blue monkey and Mangabey guided treks which are only done in the morning.  If I had the time I would also have liked to have done a full day hike or perhaps even the three-day hike to the source of the Congo.

What To Know Before You Go To Nyungwe Forest

The only downside to Nyungwe is that it’s not cheap.  Guided hikes start from $40, a trek to see Colobus, Blue monkey or Mangabeys is $70 and a visit to the chimps will set you back $150.  Discounts are provided if you do the activities over multiple days.  accommodation is also not cheap.

There are only three different options.  I stayed in the cheapest, which was VERY basic, with a shared bathroom. It cost $70 a night, which was a LOT for what it offered.  I didn’t see the other two hotels, but my guide Omar from Amahoro Tours told me that the one hotel had rates starting from $200 a night, while the other was over $300.

Still, I felt my money was well spent to see the primates.  Nyungwe is one of only a few places in the world where travelers have the incredible opportunity to observe rare primates in their native habitat. In addition, a portion of the money goes back into the local community and community members are given jobs in the park.  As a result, poaching is relatively rare in Rwanda, unlike in most other parts of the world. Conservation has a price.

Amahoro Tours, a locally owned Rwandan company can arrange your own personalized trip to Nyungwe.  Omar, my driver guide was kind enough to even stop when we saw monkeys on the side of the road!

Nyungwe Forest was one of the hidden gems I am so happy to have found on my adventure in Rwanda.

Thank you to Amahoro Tours for their support in my visit to Nyungwe Park.  As always all opinions expressed are my own.

26 thoughts on “Nyungwe Forest: The Best Kept Secret In Rwanda”