Lichtenstein Castle is known as the fairytale castle in Baden-Württemberg. Who wouldn’t agree?

It’s not on most visitor’s radar but if you like off-the-beaten-path gems, this is you don’t want to miss. The Lichtenstein Castle in Baden-Württemberg is a great castle to add to your list of must-sees.

It’s not nearly as famous as Neuschwanstein, undisputably THE fairytale castle, Heidelberg Castle or the Residenz in Munich.  It also doesn’t have a claim to fame like Burghausen Castle, the longest in all of Europe.  But don’t mistake its relative obscurity for uninteresting.

Here are seven facts about Lichtenstein Castle that will make your visit to this reconstructed medieval castle more enjoyable:

#1. Lichtenstein Castle Has a Nickname

It’s a source of pride among locals in the southwest state of Baden-Württemberg. So much so that it has acquired not one, but two nicknames.  The first is Neuschwanstein’s Little Brother, after Neuschwanstein Castle, the most famous castle in all of Germany.

The second, as already mentioned is the Fairytale Castle of Baden-Württemberg. It’s again indirectly referring to Neuschwanstein Castle, which was the inspiration for the Disney castle.

No word on what the proud residents of the nearby Hohenzollern Castle,  or Ludwigsburg Palace have to say about that. 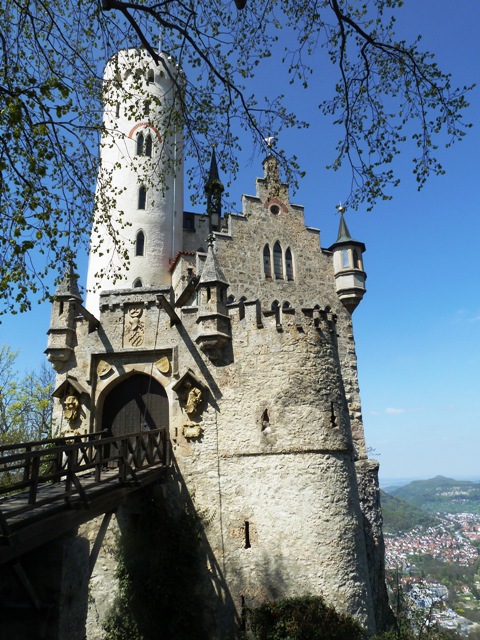 #2.  It Isn’t Overrun with International Tourists

Despite being a source of local pride, it isn’t on the radar of most international tourists to Germany.  As a result, the 30-minute tour is only available in German.

Travel tip:   English-speaking guests can ask a handout in English on the tour.  It may also be possible to arrange a tour in English or French. However, it’s only available for groups. Arrangements must be made ahead of time.

Despite it not being a stop for most visitors to Germany, it’s popular with German tourists eager to see the castle and the fantastic views. I loved Lichtenstein Castle.

View walking up to the castle

#3.  Lichtenstein is a Relatively Young Castle

It’s still an infant in castle years having being built between 1840-1842.  However, the grounds have a much older history.

The original castle dates back to 1200, but it was destroyed twice until it finally fell into ruins.

It was reconstructed to feel like a medieval knight’s castle though, so it feels older than it actually is.

#4.  Lichtenstein is a Small Castle

It’s the smallest castle I’ve been to in Germany. It’s even smaller than King Ludwig’s Linderhof Castle. However, that doesn’t make it any less impressive. And it remains one of my favourite castles in southern Germany.

One of the things I loved most was the vast views of the Echaz Valley and Swabian Alps.  And when you consider that it was only built as a hunting castle, similar to King Ludwig II’s Schachenhaus, it does start to seem rather large.

I’ve never thought of a castle as cozy but that’s the feeling I had as I toured inside –  well except for all the antique rather uncomfortable looking furniture.

How many castles have been inspired by a book?  This is one of them, the 1826 novel Lichtenstein by Wilhelm Hauff.

I haven’t read the book yet, but it’s on my reading list.  I’m curious to find out how a book inspired this Neo-Gothic structure.

#6.  Its Name is Self Explanatory

No real secret here if you speak German.  Lichtenstein is German for light coloured stone on which the castle is built on.

Clearly, German practicality has been around for at least a couple of centuries.

#7.  Lichtenstein Castle is Definitely Worth a Day Trip from Stuttgart

It’s only an hour drive south of Stuttgart. It’s one of my recommended day trips from Stuttgart.

You’ll pass by rolling hills and small villages through the Swabian Alps.  If you like castles, this one is worth a visit.  You can also turn it into a day trip by visiting Germany’s only Easter Egg Museum in nearby Sonnenbühl and Bear Cave and Fog Cave two interesting Show Caves. And if you learn anything else, be sure to share it in the comments below.

Know Before You Go To Lichtenstein Castle

Now that you know these 7 facts about Lichtenstein Castle, your visit is sure to be even more memorable!

Scroll back to top
476shares