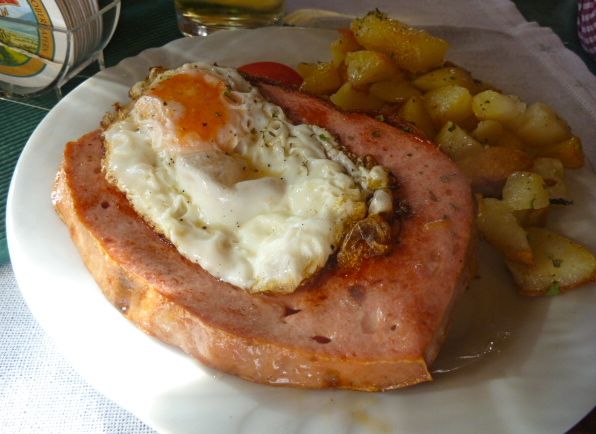 I asked looking up from the menu as we settled in for lunch at a hut overlooking the Chiemsee (lake in the German Alps).  My German dining companions struggled to explain.  “Well it’s pork” they all quickly agreed.  “It’s… a mixture of meat.”  “You really just have to try it as it’s difficult to explain,” chimed in someone else.  “It’s a local specialty (Bavarian),” offered someone else.  “It was invented by the cook of a Bavarian duke,” supplied someone else. That didn’t really answer my question about what Leberkäse really is though.

While all very interesting wasn’t helping me to identify the mystery meat.  “Is it made of liver and cheese?” I asked, my lip curled up.  “NO” came the reply in unison! Later, I  found out that while Bavarian Leberkäse doesn’t contain liver. Other varieties from other parts of Germany do contain a small portion of liver.

Despite my curiosity, I wasn’t feeling confident about ordering the mystery meat so  J.P. (my German husband) offered to order it so that I could try a bite.  When it came out, I told my German companions that I thought it resembled SPAM which was met with blank stares.  “You know the meat that comes out of a can that’s really cheap and popular with university students.”  From the scowls on their faces, it was clear that my unflattering comparison of Leberkäse to canned meat wasn’t appreciated.

I cautiously tasted a small bite – yep it tasted exactly like warm SPAM. Warning, if you feel the same way, you might want to keep your comments to yourself or try one of the German dishes that are actually really good, like Käsespätzle. On the other hand, compared to this Bavarian dish, perhaps Leberkäse is not SO bad after all!

It does make one wonder though how despite the abolition of Bavarian royalty in 1918, how Leberkäse has managed to survive 235 years since its founding in 1776!

36 thoughts on “Leberkäse (Liver Cheese): The Food of Bavarian Royalty”

Scroll back to top
0shares
We require consent to use cookies and collect data such as IP addresses that allow us, and our third party ad partners, to provide the personalized content and ads which support this site. By clicking “OK” you consent to our collection of this non-sensitive data. Click “OK” to continue or “No” to opt out of data collection.OkNoCookie & Privacy Policy