Kyrgyzstan is a wonderful place to travel to, and high on my list of favourite destinations.  The Tian Shan mountains cover 80% of the country, making it a paradise for nature lovers.

Kyrgyzstan is the perfect travel destination with plenty of mountains and nature to leave you in awe. No wonder that it’s known as the Switzerland of Central Asia! While hiking, you can also search for the elusive snow leopard, one of the few places on the planet where it remains. 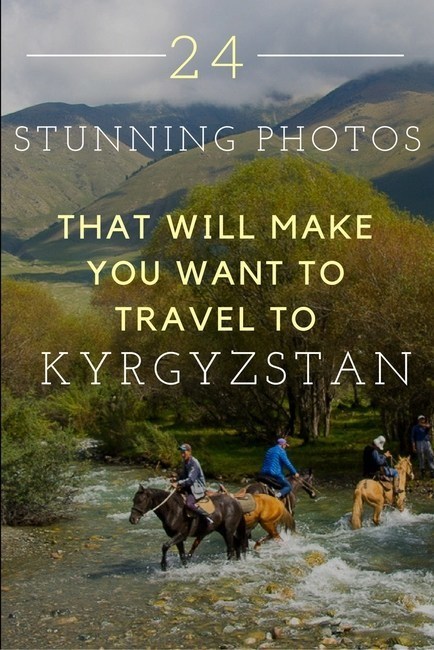 If you’re coming in winter, it’s likely to ski. While I haven’t personally tried it, I can imagine that it would be fantastic! You’ll also want to keep an eye open for camels. They’re released into the wild every winter to look for a mate and can be aggressive if…well let’s just say if they don’t find a mate 🙂

Kyrgyzstan has a history of at least 200 years. Due to its geographic isolation from mountainous terrain, much of its ancient culture has been preserved.

Try to time your visit with the World Nomad Games, held every two years in September. It’s a celebration of nomadic culture and unlike anything, I’ve ever seen. Despite its isolation, it lies on the Silk Road, so offers something for culture seekers as well.

Despite its isolation, Kyrgyzstan lies on the Silk Road, so it offers something for travellers interested in culture as well.

But rather than telling you how amazing Kyrgyzstan is, let me show you.

Recommended Reading: World Map Wallpaper and Murals: The Top Picks for Every Traveller

Photos That Will Make You Want to Travel to Kyrgyzstan:

The rugged peaks, mountainous landscape, and high alpine lakes make Kyrgyzstan a paradise for nature lovers. Less than 8% of the land is cultivated.

Everywhere you go, you experience the same thing, silence. It’s one of the most peaceful places I’ve ever been to. Just being there seems to cultivate a sense of calm inside you. 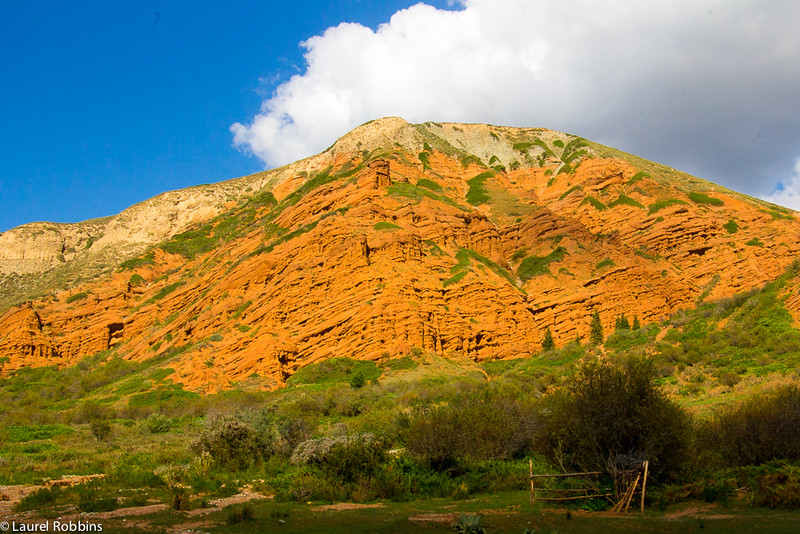 Lake Issyk-Kul and its Beaches

Lake Issyk-Kul is the second highest alpine lake in the world.You’ll want to take a cruise on the lake. Surrounded by the Tian Shan Mountains, it’s stunning.

Although it’s further away from the sea than any other country, the beaches along the lake will make you feel like you’re at the ocean. Yes, that’s right, beaches. While Kyrgyzstan probably doesn’t come to mind when you think beach holiday, you’ll find some surprisingly good ones there. 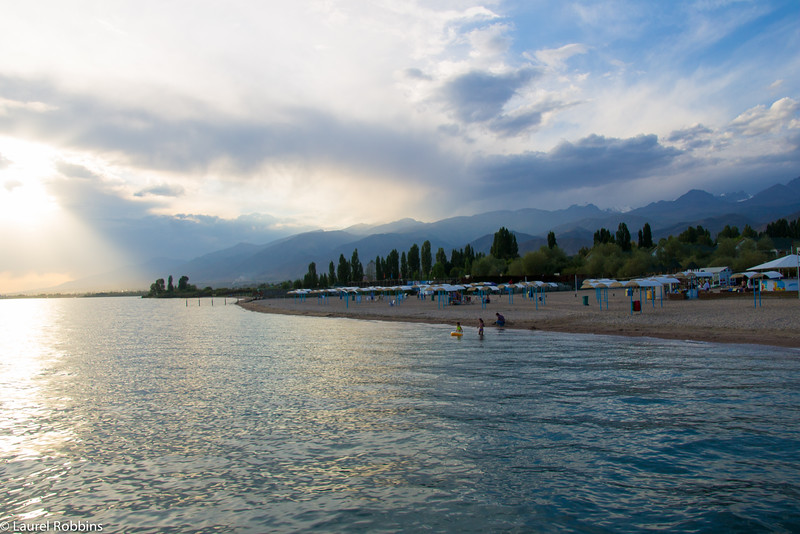 Kyrgyz people were nomadic until relatively recently, and some still are. As a result, horses played a huge role in daily life. Today, many Kyrgyz are excellent horsemen and women. I was fortunate to see their skills on display at the World Nomad Games.

I can’t think of a more beautiful place to go horse trekking as my friends Audrey and Sam did. I’m adding this to my bucket list the next time I’m back. 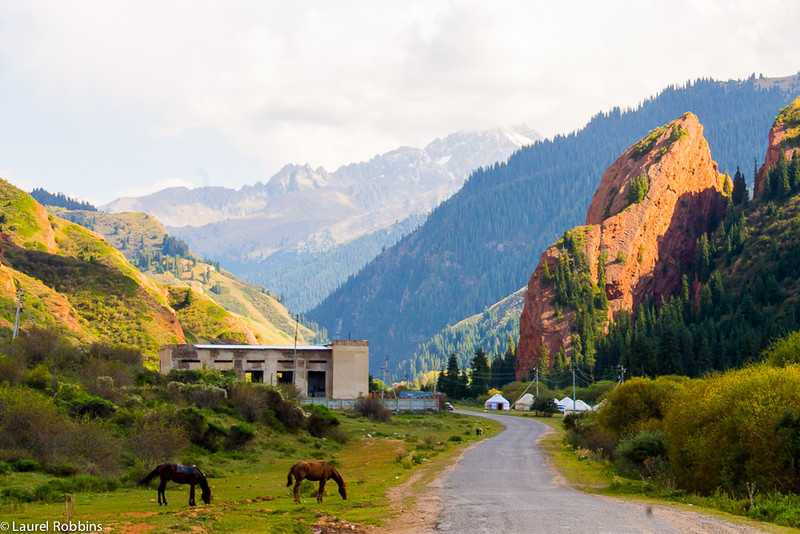 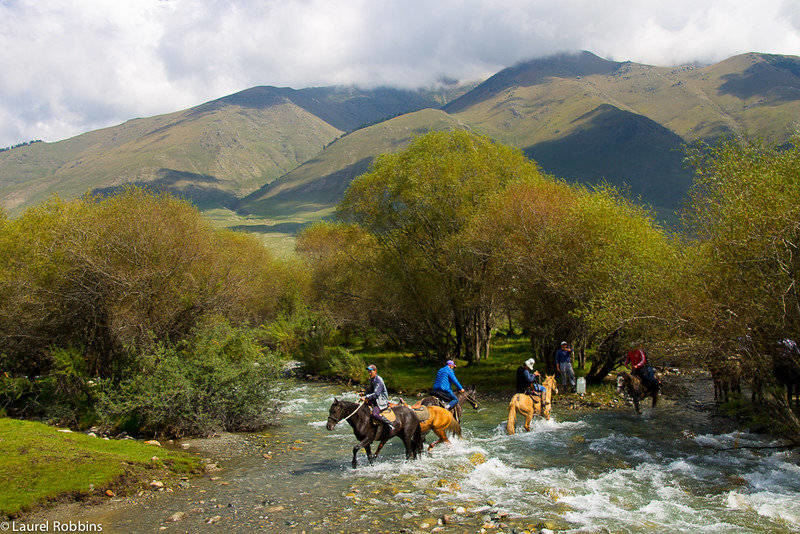 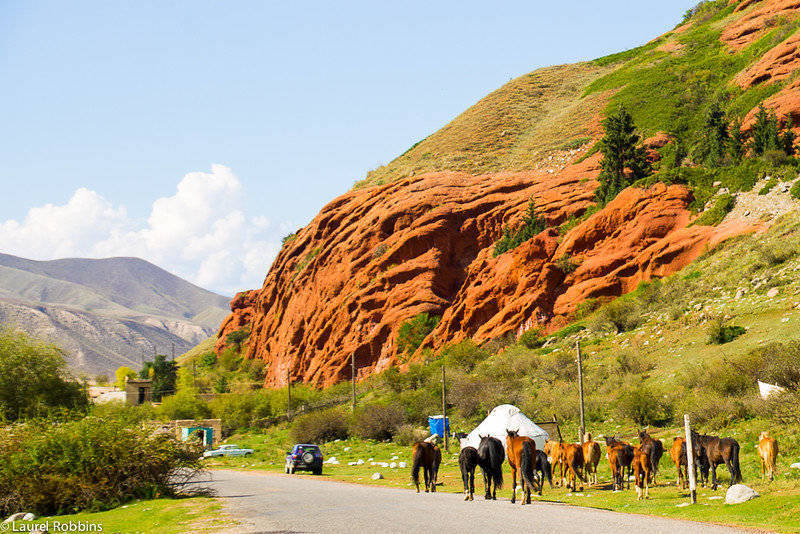 The majority of people living in Kyrgyzstan are ethnic Kyrgyz followed by Uzbeks and Russians. Despite its 2000 long history, it only became a sovereign nation after the breakup of the Soviet Union in 1991.

These petroglyphs date between 2000 BC and 400 AD and mainly depict hunting scenes. There’s no information available on site, tourism is still very much in development mode in Kyrgyzstan, so I highly recommend going with a guide.

The ancient city of Balasagun south of Tokmok in the Shamshy Valley dates back to the 9th century. It’s one of the oldest settlements in Central Asia. Here, you’ll find the Burana Tower, petroglyphs, a small hill hiding a palace and gravestones marking nomadic Turks who used to roam through the area. Visitors can explore the open-air archaeological museum.

Burana Tower is the most visible of the remains. Legend has it that a witch advised a king that his daughter would die when she was 18 years old. To keep her safe her, he hid her all alone in the tower, except for a servant who brought food. However, there was a poisonous spider hidden in the princess’s food. The princess died as predicted by the witch when she was 18.

Sleep in a Yurt and Support the Local Community

Yurts played a critical role in Kyrgyz nomadic life and thanks to Community Based Tourism; travellers have the option of staying in a yurt and eating traditional Kyrgyz food. While I ate in several yurts, I didn’t have the chance to sleep in one like my friend Leyla did.

Read this, to see what it’s really like. I’d highly recommend sleeping in a yurt when you travel to Kyrgyzstan to get a better understanding of the culture. Besides, it’s a unique experience!

I LOVED getting to know the Kyrgyz people. Although shy at first, they are incredibly welcoming. This family runs a yurt camp through a community-based tourism project and went above and beyond to make us feel at home.

Meeting the Kyrgyz people was also one of my highlights at the World Nomad Games. I had the opportunity to chat with a camel herder, and meet Zura, one of the most impressive women I’ve ever met anywhere. (You can read about it by clicking on the above link.)

Know Before You Travel to Kyrgyzstan

Kyrgyzstan is the perfect place to travel to for those that love adventure, beautiful mountain ranges and nature. This beautiful country should be on everyone’s bucket list.

Note: My trip was organized in cooperation with Discover Kyrgyzstan, and made possible by the support of the United States Agency for International Development (USAID). All opinions are my own.

Disclosure: This post may contain affiliate links in which I receive a small commission at no extra charge to you. This keeps the site ad free.