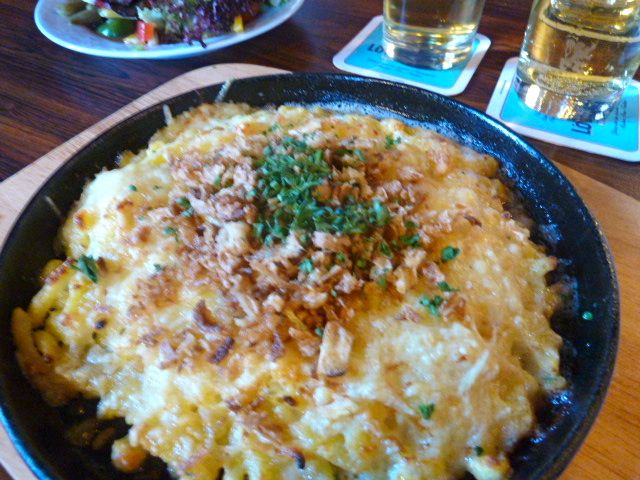 Käse Spätzle is the German equivalent to North American Mac and Cheese.

Although to be fair, Käse Spätzle is also found in Austria, Switzerland and Hungary.  My post last week about Leberkäse, a Bavarian speciality did not go over well with many of my German readers as you’ll see in the comments. That’s understandable since I unfavourably compared it to Spam (the meat that comes out of a can). But I stand by my opinion. And it’s just that – my opinion.

And I refuse to even try this Leberkäse. Would you?

So I figured it was time to highlight some German food that I actually did like.  So much in fact that it’s one of my favourite German dishes – Käse Spätzle.

Spätzle is a small egg noodle (Käse is “cheese”)which is usually served alongside a meat dish. But can also be served alone as pictured above.

It dates back to at least the year 1725, but medieval drawings show that it has likely been around for much longer.

The geographic origin of Käse Spätzle is not known. But unlike Trollinger a wine that everyone will let the Swabians have (it tastes like bad Kool-Aid), everyone wants to be the originator of Spätzle.

In that way, it’s similar to my favourite cocktail, a Hugo. Germans often take credit for it but it originated in northern Italy.

Although any Swabian will tell you in no uncertain terms that it’s a Swabian dish. Regardless of where it came from, it’s ooey-gooey melt in your mouth delicious!

I like it much better than the humble Knödel. It’s also very filling and a common staple in mountain huts but I find that Knödel generally doesn’t have much flavour.

You can find Käse Spätzle at any Swabian restaurant and many Bavarian ones as well.

It’s also common to see it on the menus in mountains huts in the German and Austrian Alps.

The best Käse Spätzle is made from scratch, but the idea of making pasta from scratch seemed daunting to me. Luckily I found a step by step recipe for it here is relatively easy.

After discovering this recipe I even bought a hobel, a cheese grater like device that breaks the dough into small pieces.  Not only did I make my very own Spätzle, but I also made it gluten-free!  Not an easy feat let me tell you, but it turned out surprisingly well.

Have you tried Käse Spätzle? And if you have tips for making it, please share below.

16shares
We require consent to use cookies and collect data such as IP addresses that allow us, and our third party ad partners, to provide the personalized content and ads which support this site. By clicking “OK” you consent to our collection of this non-sensitive data. Click “OK” to continue or “No” to opt out of data collection.OkNoCookie & Privacy Policy