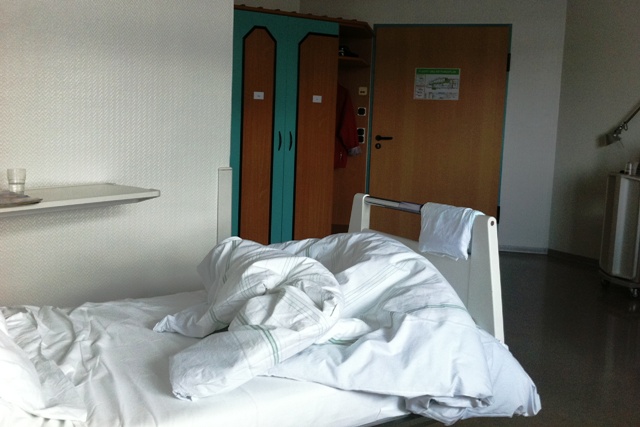 Until my stay at a German hospital, I had only experienced a few uncomfortable culture differences during my stay in Germany.

When I first moved to Germany, I was lucky enough to find that the “German way” easy enough to get used to. Although very different from what I was used to in Canada, German etiquette and culture didn’t blindside me. This was all true; until I had surgery in a German hospital that is.

My Justified Fear of German Hospitals

I knew from my own experiences with doctors in Germany that the lack of privacy would be an issue for me. And I was freaking out. And turns out my lack of privacy fears were well-founded.  In addition to the privacy issue, I was surprised to see how many other differences there were.  As I had very similar knee surgery in Canada, I was easily able to compare the cultural differences between a hospital stay in Germany and Canada.

Related Reading: Why I’m Afraid to Have Surgery in Germany 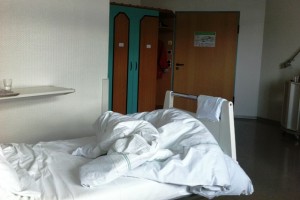 First things first, you cannot compare the quality of care in Germany. It is top-notch!

I dare say it was the best I’ve ever had anywhere, including Canada.  Germany is known for its medical competence so this didn’t come as a surprise. But I was surprised that the doctors and nurses were so friendly and caring.  Germans often have a reputation for being cold and unfriendly on the surface (although once you get to know them nothing could be further from the truth).

The nurses spent time chatting with me which calmed my nerves before the surgery. You also cannot fault them on efficiency, I had my surgery an hour before my scheduled time. Where else would you get this kind of care?

The German nurses were friendlier and more caring than the Canadian ones that cared for me. And trust me when I say this as it pains me to write anything disparaging about Canadians.

I can handle this type of culture shock. While I was expecting to receive good medical treatment in Germany, I was not expecting it to be warm.  Fortunately, I received both.

Pain Management in a German Hospital

When I woke up from surgery and saw a strange little device going into my leg yet not coming out anywhere, I panicked.  It turns out that I was also to experience culture shock regarding pain management methods.

In Canada, they usually give you an injection or pill which leaves you incoherent and rather dazed.  Not so in Germany.  It turns out that a strange little device was for pain management and was attached to a nerve in my leg that leads to the knee.  If you needed pain medicine it went in through the device, straight to the knee and left you completely coherent.  I thought this was the coolest thing ever. I hate it when pain medicine leaves you feeling groggy and out of it. 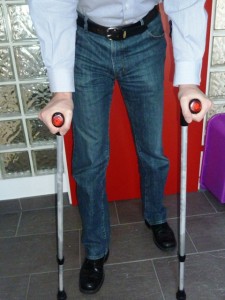 The next culture shock came with regards to how much more conservative and concerned German doctors are than Canadian doctors. It was recommended that I stay in the hospital for 3 days and 2 nights.  I balked at this. When I had very similar knee surgery last year in Canada I stayed for 4 hours after my surgery.  Both of the German orthopedic surgeons were aghast by this. But, in the end, we compromised and I stayed for one night.

Everyone was also very concerned about the risk of blood clots. And my entire leg was bandaged up to prevent against this, unlike the small bandage I had only on my knee in Canada.  I was in complete culture shock when the surgeon informed me that I would require an injection in the stomach for the next 10 days to prevent blood clots.

“Who was going to do this?”  I inquired, all of a sudden feeling sick to my stomach as I’m petrified of needles.  “You or your partner can” he calmly replied.  Seeing as how I did not receive one single injection in Canada for blood clots, I thought it was ridiculous that in Germany I needed injections for 10 days.  Conversely, J.P. (my German fiance) found the reverse in Canada ridiculous.  At his insistence and willingness to give the injections, “Germany has won” this one as we like to say regarding our Canada vs. Germany debates.

Even The Crutches Are Different From A German Hospital

So the lack of privacy issues?  Even though I knew this was coming, it still hit me like a ton of bricks and was the biggest culture shock of having surgery in Germany.

I discovered that my attitude toward privacy did not just change overnight, even when I knew that Germans have different attitudes towards it.  The first lack of privacy issue hit me less than 10 minutes after I arrived for surgery.  I was to get fully undressed with a nurse watching me.  I later asked my partner why she needed to watch me and he said it was so that she could help me with my gown and then whisk me off to prep for surgery.  It was an efficient process, I’ll give it that, but more than a little daunting, and not necessary in my Canadian opinion.

Oh well, I thought to myself, at least we’re getting it over with, that should be it for the privacy issues.  If only…..

After the surgery, I found myself in the recovery room.  There were no curtains separating the beds, but I could deal with that.  A few minutes later when I was more coherent I noticed that I could see the reception area and hallway.  Yep, the double doors were wide open to the recovery room and naturally anybody walking by couldn’t resist looking in, especially small children.

I started pointing to my eyes, then pointing to the child giving the universal “I’m watching you” signal. Until my partner caught me in the act and told me to stop. In my defense, I was still on drugs.   It was a weird experience though. I really didn’t need the general public seeing me in the recovery room.

That would have been bad enough, but then I had to go to the bathroom…..

The nurse calmly brought over a bedpan and lifted the covers off my bed.  She expected me to do my business in a recovery room with 5 other patients. And the double doors wide open to the public reception area.

SO NOT HAPPENING IN THIS LIFETIME.

I muttered something along these lines but with more profanity to my partner. He then tried to diplomatically explain to the nurse in German that Canadians are shier than Germans and that I would like to go in private.  She looked completely baffled. Clearly, she was not understanding what the big deal was.  Nevertheless, she wheeled my bed to another room to do my business in private.

I have never been so relieved in my life (pun intended).

There are pros and cons to living abroad and culture shock catches up with you sooner or later. It was not my best experience, but surgery in a German hospital was not my worst either.

55 thoughts on “My Stay at a German Hospital: A New and Uncomfortable Experience”